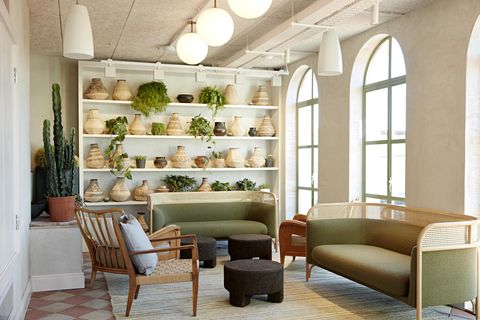 We round up the latest members’s clubs to open in the capital and the purposes behind them:

Pioneering the new, more altruistic, way of attracting members, this club, which opened last year, describes itself as ‘a home for a diverse community of people passionate about social change’. It hosts events around the themes of gender empowerment and sustainability, with talks on subjects such as ‘how to shake up philanthropic giving’. The venue’s serious green credentials are woven into its very fabric, too, with the hemp-based plaster that covers many of the walls providing more efficient insulation and improved air quality. From £1,800 per year theconduit.com.

The cooler little sister to members’ club Home House, this venue’s raison d’être
is to be the catalyst new entrepreneurs need to build their empires. There are bedrooms, pitching suites, restaurants and lounges, while a programme of talks (speakers include self-starters such as Kelly Hoppen) provides inspiration. Even its colourful interior – the work of Russell Sage Studio – is specially designed to help you get down to serious business. From £1,500 per year homegrownclub.co.uk.

‘There is a special place in hell for women who do not help other women,’ said former US Secretary of State Madeleine Albright. This feminist call to arms is what inspired the AllBright clubs, the second outpost of which opened recently (another is planned for LA soon). Designed by Suzy Hoodless, the Mayfair branch takes a holistic approach to women’s careers, with wellness treatments offered alongside programmes such as its ‘AllBright Academy’. Monthly ‘pitch days’, which pair entrepreneurs with potential investors, are another highlight. From £1,150 per year allbrightcollective.com.

This newly opened venue sees itself as a place where people who care about the planet can convene. Sustainability runs to its very core – all food and drink on site is seasonal and locally sourced, while the deli serves only plant-based fare. The focus isn’t just on the environment, though, with mental wellbeing also important. Interiors take a leaf from the club’s name, featuring green walls and plants to promote tranquillity, while perks include pods for meditation, as well as skill-building workshops and events. From £950 per year arbor-etum.com.