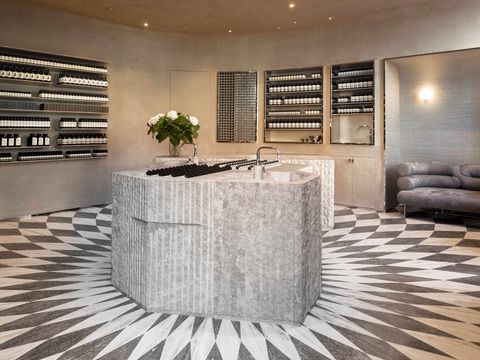 The Melbourne-born skin, hair and body care brand Aesop has always ploughed its own design-led furrow; focussing on the quality of the product, speaking to an environmentally aware consumer and taking a more wholesome cultural approach to marketing than your average beauty brand. Started by hairdresser Dennis Paphitis, it is today 100 per cent owned by Natura Cosméticos and now boasts over 230 signature stores across the world, every one architecturally-led and every one unique. The roll call of design collaborators include Snøhetta, Frida Escobedo and the Campana Brothers to name a few.

The latest Aesop to open in the UK is in London’s historic Piccadilly Arcade. The curved corner store is the second outpost conceived by the interior design studio of Luca Guadagnino. The first store by Studio Luca Guadagnino was completed in Rome last year, the calming, monastic space was composed from native Roman materials of travertine, dark green, blush pink and sand-coloured marble, with a ceiling of straw bricks.

In the latest London outpost, a similar palette of neutrals and materials generates a soothing atmosphere, but Guadagnino has devised an enticing floor feature that is likely to ensure footfall from passersby. Diamond shaped tiles of grey titanium travertine and sandy mocha light travertine, radiate geometrically (in a nod to the patterned stone floor of the nearby Burlington Arcade by Jamie Fobert Architects) from a central boulder-like counter and basin formed from roughly-cut marble (weighing in at 2000 kilos its from the same quarry as that used for a basin in the Rome store). In a nice detail this dynamic floor pattern extends into the coir mat at the store’s entrance, which is also clearly defined by a weighty, arched stone portal.

A discreet stairway to the side of the ground floor is a vision of gentle, putty-coloured neutrals. Simple travertine treads are paired with stucco walls one side, with a leather-wrapped handrail, and timber panelling impregnated with natural pink pigment. These fleshy tones were inspired by the paintings of Lucian Freud. On the first floor, reclaimed timber boards radiate out in a octagonal formation from a central counter. This is pierced by a circular light well, which reveals the metal structure of the store and views of the floor below.

Throughout the interior large ceramic Belfast sinks on stainless steel frames with brass faucets provide further display storage, planting opportunities for vines (which will eventually creep up to cover the ceiling) and also lend a utilitarian heritage feel to the space. Windows are dressed in shirt fabric dipped in tea to soften and give an aged, worn look. While a sofa encourages customers to pause, not only to discover the products and enjoy skin consultations, but enjoy this haven of calm in the midst of St. James’s.