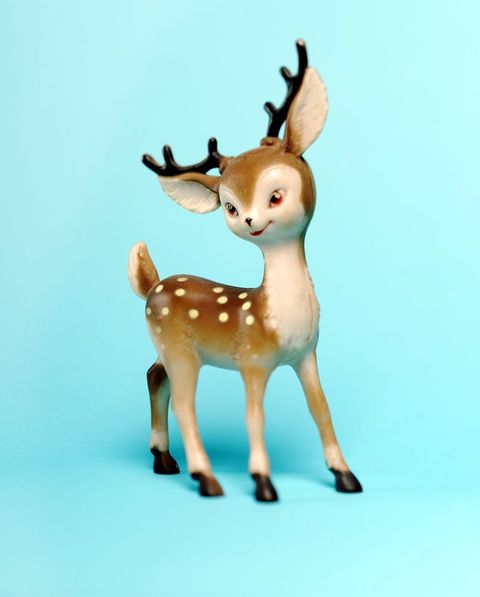 I wasn’t expecting to be the new owner of a wicker reindeer, lit up from the inside with tiny LEDS like it had survived a nuclear attack.I hadn’t really anticipated a wreath made of fake logs, nor how impractically heavy it would be, and how I would spend the next six days trying, unsuccessfully, to fix it to my front door. It was 19 December, I had horribly cheap baubles and armfuls of garlands strung with white cotton wool – I guess they were meant to be snowballs. I was genuinely confused about what had just happened. I’d only gone shopping for lightbulbs...

The festive season makes me lose my taste.Not for everything; I remain exacting on the matter of victuals, clothes, accessories and music. I won’t drink Baileys, wear a Christmas pudding print on any of my clothes – not even my underwear – deploy pompoms or listen to Mariah Carey, except by accident. Yet I lose my confidence around the home.I get interiors yips, so desperate for perfection that everything ends up looking terrible. AndI know I am not alone because of the furniture ads that appear at the end of November, saying ‘still time to order for Christmas’.

Who on earth buys a sofa on a whim? A lot of people, clearly. And, granted, there may be some logic to that since, what every our relationship with your wider family, at the very least, you have to let them sit down.But the underlying story is the fundamental conflict between what Christmas means and what it looks like. You want it to be perfect: harmonious yet exciting, celebratory but peaceful – arguably, these are impossible demands even before you’ve started shopping. But its aesthetic goes against every principle of art and design. Even at its most tasteful– and I’m setting the giant paper snowflake and fairy lights at the apex of style – it’s evanescent. It has to be, dummy. It’s not even a season, it’s a bracket within a season, it even has an established end point (which is not, as you might suppose, Twelfth Night, but the day the council has agreed to collect your tree).

The aesthetic of your home, meanwhile, almost has longevity as its first principle: whatever your signature look, you want things that are built to last, that take pride in their own craft. It’s not because Christmas is garish that it jangles your senses – plenty of people have garish taste, as evidenced by the timeless ubiquity of the yellow cushion– it’s because it’s disposable, and all the words that go with it: kitsch, tinny, lightweight. There is nothing more unsettling in a home than something that looks as if you can lean on it, then breaks when you do (apart from a tarantula, and a sink in the bedroom).

You can make a special exception here forChristmas decorations with sentimental value, those that have been handed down through generations, a source of sibling rows that can last decades. Unfortunately, these are often homemade and, as such, even more rubbish than the stuff you’ve bought. The best answer, tree-wise, by the way, is to embrace the impermanence with edible decorations. These look worse, even, than the star your mum made out of a coat hanger when she was a kid, but at least you can eat them.

People differ in what they mean by visual order, but everyone would agree this is a time of criminal misrule. Minimalists think they’re the most ordered people on earth, but collectors of vintage crockery and elegant weapons of war have their own careful sense of what goes where, and the peace that it engenders is that everything becomes emotionally invisible – when it’s in the right place. No Christmas item is ever in the right place. Trees are only chic on TV and tinsel always makes you look like a cheap events coordinator trying to cover up wires. Piles of presents, so quintessential to the look, have all this emotional freight: are they right, are they wasteful, does anyone need more stuff?

This is not, by the way, a Scrooge argument for ignoring Christmas altogether, or even dialling it right down with some star-shaped ceramics and discreet candle displays. Go wild; go technicolour; go full green and red for that uncanny sensation of being stuck in surrealist traffic. Indulge your festive whims, which are really neuroses. And when the quest for perfection ends, you’ll remember what perfect actually looks like.