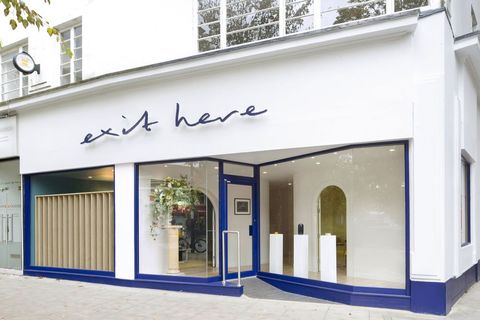 Oliver Peyton has long led the way in hospitality. The tenacious Irishman has been at the forefront of London’s club, bar and restaurant scene since the 1980s and 90s, when he opened hip hotspots such as RAW Nightclub, the Atlantic Bar & Grill and Mash micro-brewery. More recently, he’s revamped art gallery restaurants with catering company Peyton and Byrne. Considering this ever-maturing trajectory, perhaps it’s not so shocking that next on his agenda is the funeral industry.

‘It’s a hospitality business first and foremost,’ he says, as we chat inside the bright and welcoming Exit Here funeral parlour on London’s Chiswick High Road. ‘It’s about taking care of people, from picking up the body to providing caskets, cremation or burial. People can choose a natural service at Sheepdrove Organic Farm in Berkshire, where there is capacity for 120 diners and 80 guests to stay, if people want to spend more time celebrating someone’s life.’

Frustrated by the experience of his parents’ funerals, Peyton was prompted to revolutionise the Victorian-influenced approach, all black and lace and ‘death hidden behind a curtain’, for those he calls ‘the Woodstock generation’. Determined to offer the full service at affordable prices (he says they’re ‘the mid-range John Lewis of funeral services’), Peyton teamed up with third-generation funeral director Barry Pritchard to take care of the business side, while flowers are contributed by Wild at Heart. Meanwhile, Ben Masterton-Smith and his firm Transit Studio were tasked with designing the interiors as well as other burial paraphernalia.

Inside, there isn’t a dose of black in sight. Instead, the atmosphere is intimate, eclectic and domestic, with light flooding in through the shopfront glazing, which has custom-designed oak louvres for privacy, if needed. ‘We wanted to create an environment that was friendly and open to the street, to be as accessible as possible in breaking down the taboos around dealing with death,’ says Masterton-Smith. ‘This follows through to the casket (made in Durham) and urns, with simple forms and touches of colour, and even bolder choices such as the hand-drawn casket inspired by the Day of the Dead festival, reframing the conversation from the sadness of death to a celebration of life.’

And for an extra £100 on top of the £650 starting coffin price, customers can specify any RAL colour they want. There are plenty of other designs, too, from eco-friendly Swedish timber to British wicker. Peyton is aiming to be as sustainable as possible, with all products eventually being biodegradable. And although Exit Here is about the end of life, this is just the beginning for the kind of bespoke service Peyton wants to offer. So, from cocktails to coffins, if anyone can turn death into a celebration, it’s him. exithere.com