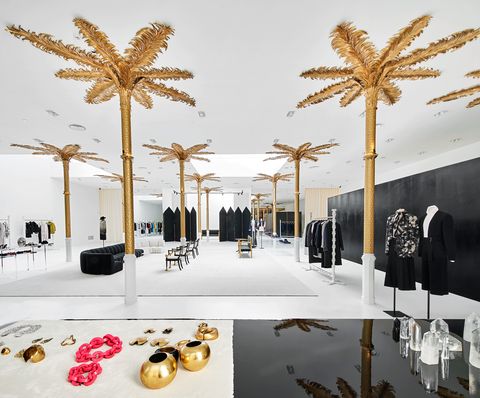 A snow-white space, punctuated by rows of towering golden palm trees, their gilded fronds brushing the ceiling – it’s fair to say Darial in Barcelona is not your average retail spot. This chic 1,500-square-metre emporium of style houses international womens and menswear (JW Anderson A.P.C.,Maison Margiela, etc), a bookstore and restaurant, plus a contrasting raw concrete gallery space in the basement. Conceived by the32-year-old French-Jordanian fashion designer Djaba Diassamidze, ‘Darial takes its name from the old Persian word for “gate”. It initially referred to a specific place, but I’ve taken it to mean something more symbolic; in terms of a gateway to a new beginning,’ he says.

Darial occupies a listed heritage property, Casa Tomàs Roger in Barcelona’s hip modernist neighbourhood, Dreta de L’Eixample. Although Paris-based, Diassamidze chose to open his first store in the Catalan capital because of his love of the Mediterranean city, particularly the quality of the light. Inspiration for the lifestyle concept came, however, from the iconic Parisian boutique Colette. ‘Growing up in Paris, it was very important to me,’ he recalls. ‘We went for lunch there and to discover new magazines. It was part of my education.’

Diassamidze, who held his first catwalk show in Georgia aged 16, clearly had a rich, creative upbringing. ‘My grandfather designed his own clothes, we always had beautiful fabrics and tapestries at home. I knew I wanted to be a couturier and my family helped me from day one.’ His architect father assisted him in translating his east-meets-west vision for Darial, which takes inspiration from places like Paris’s Palais Garnier, art-deco cinema and French new-wave films.

Comfort comes in the form of sculptural furniture by 20th-century greats such as Pierre Paulin and Pierre Chareau. Meanwhile, a series of custom lacquered screens in the store are a nod to one of his heroes: ‘They are a direct tribute to Gabrielle Chanel’s apartment in Paris and the Coromandel screens that she loved.’