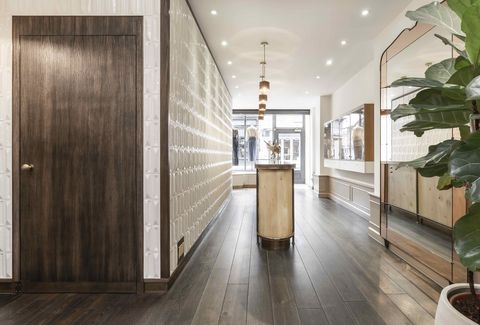 Notting Hill’s Couverture & The Garbstore has earned loyal following of devotees, stylish urbanites who adore the well-edited selection of independent fashion brands (YMC, Ace & Jig, No.6 and Meadows, for example) which are artfully blended with homeware. Co-founders Emily Dyson and Ian Paley clearly have an eye for both. You’ll find Scandi staples from Ferm Living and Hay sitting comfortably with British hand-thrown ceramics, Japanese tableware and textiles from New York – the store is a haven for coolhunters.

It’s been open since 2008, so the pair decided appointed the celebrated interior design firm Pernille Lind Studio to give the store a makeover having been impressed by her work at Hotel Sanders in Copenhagen. ‘It was looking a bit battered. It was important to keep the feel of the store – our customers like that it doesn’t feel intimidating. Since we sell clothes as well as homeware I always wanted the setting to feel homely, warm and relaxing but not boring,’ says Dyson.

‘The direction of materiality was discussed in the beginning,’ says agency founder Pernille Lind, ‘but otherwise we were given the opportunity to freely create.’ The shop is reflective of the designer’s signature style, there are brass details, walnut woods, ecru and off-white walls. The main challenges were to marry a fresh new design with the rest of the store while working with such a narrow transition area.

Lind rose to the challenge. ‘Having some spatial restrictions on the size and shape of the new counter, made it more important to make sure we optimised and utilised what we did have, in order to accommodate the needs of storage, display and ample counter space for wrapping and serving customers,’ she says. To improve flow throughout she took note of the existing materials palette of timber floors, brass details and other bespoke elements and ensure that the new designs integrated seamlessly into the new space.

Bespoke elements include Italian-made three-dimensional tiles. ‘There are three types laid as a varied pattern on the wall. Each tile is also glazed in such a way, that small specks of terracotta are revealed on the surface. The application adds a playful depth and texture to the long wall behind the counter,’ says Lind, adding ‘The leather handles on the central island were chosen to reflect the terracotta specks found in the tiles and also because of space restrictions, ‘having something soft rather than metal knobs or handles, would be less of a jab if brushed up against.’

The front of Couverture and the Garbstore
Photography: Bill Bolton

The success of the project is already evident, as Dyson points out ‘Customers often ask where we have sourced fixtures and this has increased, particularly since Pernille discovered these beautiful tiles. We strive to make the store a source of inspiration, not only with what we sell, but with the entire experience and this interior redesign really enhances that. pernillelindstudio.co/