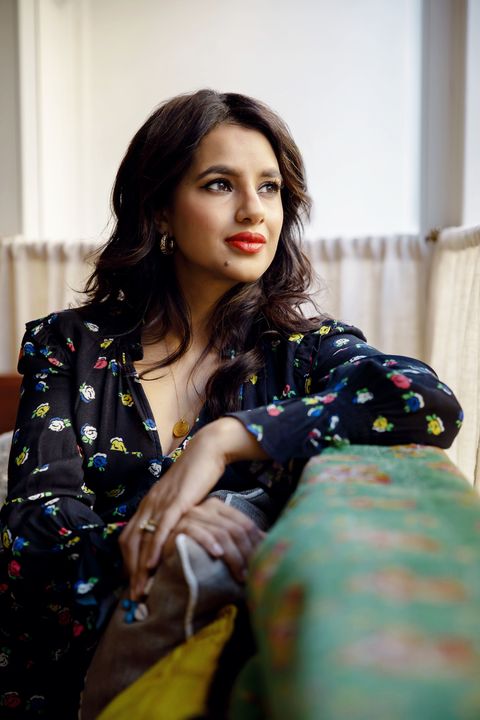 Though it was her triumphant turn on Gordon Ramsay’s The F Word that saw chef and food writer Ravinder Bhogal beat 9,000 women to the title of ‘Britain’s next Fanny Cradock’, she’ll tell you her culinary career began at her mother’s side as a child.

It’s this implicit understanding of food’s link to identity that has won her an army of fans, including Yotam Ottolenghi and ‘ultimate food heroine’ Nigella Lawson, who declared her Scrag End Pie the best shepherd’s pie in London. You’ll find that and more ‘proudly inauthentic’ recipes in Bhogal’s second book, Jikoni, named after her Marylebone restaurant (Bloomsbury, £26). ravinderbhogal.com

The book that changed me is Nigella Lawson’s How to Eat. I bought it on my lunch break when I was an 18-year-old beauty counter girl at Selfridges and read it on the train journeys home to Kent. It was like someone had opened the window and let light and air in.

The writer who moves me most is Dominica-born British author Jean Rhys. I so relate to Antoinette Cosway’s fragility at leaving behind a lush tropical island for grey England in Wide Sargasso Sea, because I made that voyage, too.

My all-time favourite piece of music has to be Bulleh Shah by Abida Parveen. The humanity in the lyrics moves me to tears every time. I’m currently listening to Beyond Skin by Nitin Sawhney, whose song The Boatman was the track we played for our first ever service at Jikoni.

The record that makes me instantly happy? If I Can’t Have You by Etta James and Harvey Fuqua, which takes me back to my wedding day.

The last exhibition I saw was William Dalrymple’s ‘Forgotten Masters’ at The Wallace Collection, which revealed a whole new roster of artists from India who had almost been written out of history by imperialism. It gave the respect due to these brilliant master painters, who were treated with such contempt by the East India Company.

My most loved cultural spot is the National Portrait Gallery. It’s where I first met the late, great writer and critic AA Gill, who was charming.

If I won the lottery, I’d buy Three Girls by Amrita Sher-Gil, which portrays Punjabi women contemplating a destiny they are unable to change. My ancestors are from Punjab, so it makes me feel privileged to be an independent woman and reminds me to honour the spirits of those who struggled before me.

I love to collect matchboxes, especially from restaurants. My favourites are ones made by Archivist Gallery.

My favourite place in the world is Mumbai. It’s such an electric city full of beautiful architecture, artisans and food. I love that you can eat simple traditional thalis or the most cosmopolitan dishes. It’s always such a treat to be there.

My desert island dish would have to be a simple dhal and rice cooked by my mother, followed by a large tiramisu made by Paolo Castelli, the chef at Trattoria Dardano in Cortona, Italy.