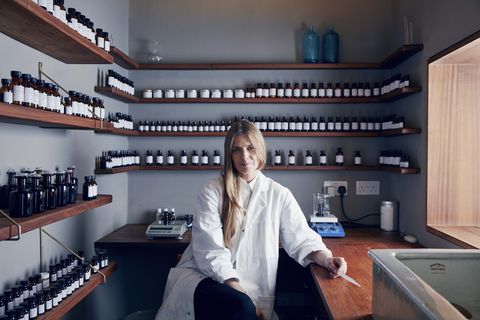 For almost 30 years, British perfumer Lyn Harris has been creating fragrances to seal moments in time.

Like a form of poetry, perhaps, she swaps stanzas with scent notes, pentameter with olfactory synchronisation. She encompasses in liquid form the instant when you breathe air just freshened by a spring shower, for example. Or the feeling you get stepping into a room enveloped with the warmth of burning embers from a crackling fire. ‘It provides the raison d’être for everything I do,’ she says.

So too have Vincent Farelly and Jean-Baptiste Martin, co-founders and artistic directors of French wallpaper, fabrics and home accessories brand Antoinette Poisson, woven storytelling into their ethos. They have taken their name, after all, from their muse Madame dePompadour – born Jeanne Antoinette Poisson, she was Louis XV’s mistress and considered one of France’s great interior decorators of the 18th century.

With the launch of Antoinette Poisson’s three new fragrances, it made sense to call on Harris’ scented storytelling nous. ‘Our mutual use of high-quality materials and sense of craftsmanship made collaborating with Lyn a very natural and immediate fit,’ says Martin from their chic atelier in the 11th arrondissement of Paris.‘People were surprised we didn’t do home fragrance first but that would have been too easy,’ he furthers. ‘We wanted something really special, such as an eau de parfum, to really pull you into Pompadour’s story.’

For ‘Joli Bois’, it was to mark the moment that Pompadour first meets King Louis XV in the depths of the royal forest of Sénart, so Harris drew on unusual fragrance notes such as deep green ivy, irone (iris) and the undercurrent of forest woods such as cedar. ‘Bien Aimée’, reflecting the marquise’s time spent wandering through the gardens of Versailles as the king ’s official mistress is, ‘a joyful reflection of Pompadour’s pride in her garden, with lilac, jasmine, orange blossom and cassie absolute’, the perfumer explains.

‘Tison’, intimating the former mistress’ later quiet, fireside years after she retired from court life due to ill health, resonates with notes of terebenthine (turpentine), galbanum, papyrus and beeswax, ‘to evoke the idea of her drinking cocoa by the fireside’. Three new Antoinette Poisson patterns, designed for the packaging, are available to order as wallpaper and fabric prints, too. Each fragrance bottle, made by the 100-year-old Waltersperger glassworks in northern France, is hand-etched with an arabesque design reflective of Pompadour’s time.

‘The papier dominoté style of graphic florals and geometrics for us felt strong and modern – it was a spirit we wanted to bring back to today,’ Martin says. The same also applies to the new scents: ‘They are an evocation of three moments in Madame Pompadour’s life and because we bring some of our favourite fragrant notes into the mix, they don’t feel old.’

‘They have such an earthy sort of magic and a passion that makes them so intellectually creative,’ Harris enthuses of the Antoinette Poisson duo, who both met while studying conservation at the Sorbonne. ‘We were always crazy about old things,’ Martin says of their childhoods immersed in flea markets and antiques.

Antoinette Poisson was born in 2012 after the pair, at the time also working with Julie Stordiau, discovered the traces of ‘domino’ wallpapers at an historic house they were restoring in Auvergne. The 18th-century ‘dominotierie’ tradition of block printing and then hand stencilling colour pattern onto sheets of paper not much bigger than A4 had died with the Industrial Revolution, so they decided to resurrect the craft for themselves. Today, their prints appear on French linen, writing paper and notebooks, Gien dinnerware and fashion, including Gucci’s Resort 2019 collection.

Back in Harris’ Perfumer H Marylebone atelier, designed with a mid-century modern feel by Retrouvius’s Maria Speake – dark salvaged woods and grey walls and floors offsetting the moody hues of Michael Ruh’s hand-blown glass vessels encasing fragrances and candles – the sought-after perfumer has launched three new fragrances of her own. ‘Slightly mad and different,’ she laughs of ‘Cucumber’ (a light, green cologne with a twist of watermelon and sea moss), ‘Pear’ (a gentle floral with notes of iris, rose and vanilla) and ‘Salt’ (a herby, spicy mix with hints of cardamom and patchouli).

Harris also conceived three new scented pantry staples to go with the latest fragrances and to add to her existing range of lemon-infused Spanish olive oil, and ‘Yorkshire’ and ‘Smoke’ loose teas. They include a juniper and lemon-tinged ‘Cucumber Pickle’ made by Yorkshire-based Rosebud Preserves, a herb-infused ‘Garrigue’ fleur de sel from Guérande in Brittany, and a ‘Violet’ tea, made in collaboration with Timothy D’Offay from Postcard Teas.

Any fragranced culinary ingredient can be more gimmick than tastebud delight, but these all stay true to Harris’ very personal, and fastidiously particular, palate. ‘In my fragrance language, I don’t like anything to dominate. I like it to all work in harmony,’ she says. ‘When I put fragrance into a product, it’s because I believe it is a really special way of experiencing it.’ perfumerh.com; antoinettepoisson.com

This content is created and maintained by a third party, and imported onto this page to help users provide their email addresses. You may be able to find more information about this and similar content at piano.io
Advertisement - Continue Reading Below
More From Lifestyle & Culture
Inside Tate Modern’s Sophie Taeuber-Arp exhibition
Hermés creates an oasis in the heart of London
Advertisement - Continue Reading Below
My Cultural Life: Emily Mortimer
The best UK gardens to visit if you love design
Inside Yinka Ilori’s art installation at Wimbledon
9 of the best architecture and design podcasts
My Cultural Life: Edmund de Waal
Inside east London’s new-look Museum of the Home
The Design Museum’s Charlotte Perriand exhibition
Why interior design shows are must-watch TV