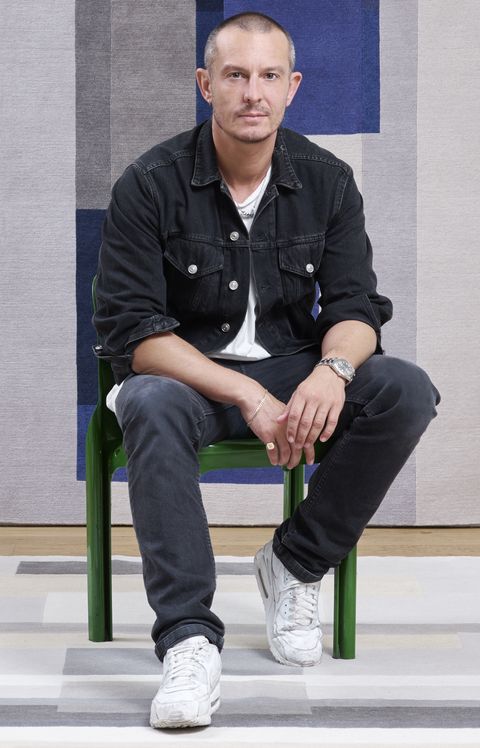 Success came swiftly for Scottish designer Jonathan Saunders, whose graduate collection at Central Saint Martins earned him the Lancôme Colour Award and attention from Alexander McQueen, for whom he went on to design the now-iconic ‘Birds of Paradise’ print. A former creative director at Diane von Furstenberg and Pollini, he has since translated this innate sense of colour – often kaleidoscopic, but always considered – into homeware as Saunders Studio. The second furniture collection, launched last year, draws on Japanese architecture, the Bauhaus and his signature screen-printing techniques.

My all-time favourite piece of music is Strings of Life by Derrick May and Michael James. It gets me in the mood for dancing. The first album I really loved was Pink Floyd’s The Wall.

At the moment I’m listening to Yves Tumor, a new artist that I’ve recently discovered, as well as a playlist made for my new apartment that includes Cocteau Twins. Their track Pearly-dewdrops’ Drops makes me feel 18 again.

The book that influenced me the most is a three-volume set on artist Victor Vasarely. His work inspired my masters collection, which then started my fascination with graphic sensibility. At the moment I’m reading Widow Basquiat, which is a memoir on the artist through the eyes of his muse Suzanne Mallouk.

Recently I’ve been watching the third season of Succession, and Seinfeld – it wasn’t on my radar when I lived in London, but now I’m obsessed. I also watched Veneno, the story of [Spanish trans icon] Cristina Ortiz Rodríguez, which was incredible.

Favourite films? True Romance, In the Mood for Love, and 2001: A Space Odyssey are my top three classics. I’ve just watched Titane, which is a twisted and amazing French movie.

My all-time favourite galleries are Naoshima and Teshima islands in Japan. The experience of travelling around contemplating art and nature blew me away. I could have stayed lying on the floor all day at the immersive Teshima Art Museum by artist Rei Naito and architect Ryue Nishizawa.

The best exhibition I’ve ever seen was a collaboration by Keith Haring and Jean-Michel Basquiat in Melbourne at the National Gallery of Victoria. The curation was incredible, and it managed to capture the friendship and love that they had for each other. They are two artists that move me and to see them together was inspiring.

I have a collection of first-edition books. I love printed matter, and especially the way books were printed in the 1960s and 70s.

If I won the lottery, I’d buy a John Chamberlain crushed car sculpture. I recently saw a large-scale work by him. I’d love to have a James Turrell piece in my garden, but I’d need a garden first.

My top podcast tip is Dax Shepard’s Armchair Expert, especially the episodes featuring the not-so-famous experts in their own fields.

My favourite place to visit in the world is Mexico City, primarily because of the people and the food. The energy there at the moment is really exciting. I’ve never been to Africa other than Morocco and it’s a dream of mine to go on safari.

This year, I’m looking forward to developing a new skill – I want to learn how to work with stone – and reconnecting with my friends in London who I’ve missed so much over the past two years. saundersstudio.com