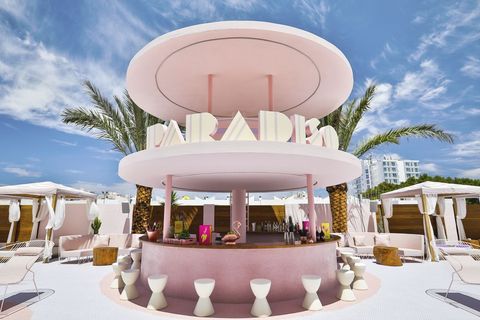 The distinctive 1970s aesthetic, with its bubblegum, pastel hues, makes the Paradiso Ibiza Art Hotel the Balearics’ hottest new destination. It’s the fifth project by the Concept Hotel Group, which called on the Madrid-based studio IlMio Design – run by Italians Andrea Spada and Michele Corbani – to achieve its vision of creating a tribute to Miami Modern architecture, or ‘MiMo’.

This exotic style sprung up at the end of World War II, in the wake of the Art Deco movement. IlMio has brought MiMo’s key characteristics –poured concrete, sherbet pink-painted stucco, fluorescent signage and a glistening pool surrounded by palm trees – to San Antonio Bay on Ibiza’s west coast. The Miami look continues inside, too: note the motel-style strip lighting in the lobby, Austin Powers-esque ripple-effect headboards, giant cacti and mid-century furniture.

You’ll find a gallery exhibiting local art on the ground floor, as well as an art library and one-off works in the ten Art Suites. For those who want to have their Big Brother moment and be part of an installation, there’s a bedroom in the lobby encased in glass, which an artist-in-residence will use when it’s not occupied by guests. There’s also an outdoor cinema and ‘Glam Bingo’ nights, plus Cosmopolitans can be mixed at Andy’s, the in-house bar, and served poolside. From £129 per night, paradisoibiza.com