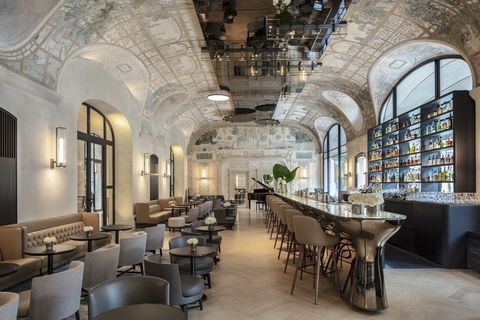 Location: Rising from the corner of Ruede Sèvres and Boulevard Raspail like a great ocean liner from the golden age of cruising, Hôtel Lutetia is moored in the Parisian district of Saint-Germain-des-Prés. The artistic heyday of this vibrant neighbourhood – beloved by Pablo Picasso, Ernest Hemingway and Simone de Beauvoir – peaked in the mid-20th century, but its streets still buzz with creative energy. Built in 1910 by the owners of the nearby Bon Marché department store as accommodation for its patrons, the Lutetia has since been owned by the Taittinger Champagne family, Starwood Hotels, and, finally, property group The Set, which bought it in 2010. Following a four-year,£179 million renovation overseen by French architect Jean-Michel Wilmotte, the hotel reopened last year.

Architecture: A regular at the old Lutetia, Wilmotte had a particular empathy for the building which – as the only grand hotel on the Left Bank and a former haunt of everyone from James Joyce to Charles de Gaulle – retains a special place in Parisians’ hearts. Constructed of glass, steel and concrete in a style that straddles the transition from art nouveau to art deco, the hotel was state of the art in its day, but after a century of continuous service had become tired. Wilmotte’s vision was for a bright new aesthetic – an update for contemporary travellers that would at the same time accentuate the hotel’s original DNA.

‘The challenge,’ he says, ‘was to revive the hotel while respecting its roots, its personality.’ The Paris-based architectural firm Perrod & Richard, specialists in historic buildings, worked on renovations that saw the stone façade, adorned with flowers and grapevines, restored to brilliance, a mosaic of the ship – the hotel’s emblem – faithfully reinstated on the lobby floor, and frescoes painstakingly revealed over 17,000 hours of work. Meanwhile, the roof of an inner salon was removed to create a central courtyard that allows light to spill into the hotel.

‘Tourists will discover something new, and the dream of the Lutetia will start again’

The number of rooms and suites was reduced from 230 to 184, with spacious bathrooms and soundproofing added to every one. A spa, pool and fitness area was also incorporated.‘In the end,’ says Wilmotte, ‘we eliminated every detail that didn’t have enough history attached, and have rehabilitated everything that did.’

Interior: The feeling of being aboard a luxury liner repeats throughout the Lutetia, thanks to its navy and cream colour scheme, mirrored surfaces, bronze finishes and, upstairs, the long, dark corridors that lead to its rooms and suites. Wilmotte has paid attention to everything, down to the Hermès cushions, Murano glass lights and the linen on the beds. Much of the furniture is from Italian brand Lema, and every bathtub is carved out of a single, two-tonne piece of Italian Calacatta marble.

Opening a little later than the main hotel, the seven Signature Suites ranging from 57 square metres in size to a vast 169 square metres, also by Wilmotte, were recently completed. Some boast Eiffel Tower views and all have their own private terrace. Perhaps the most notable is the St Germain Penthouse, which has been designed in collaboration with hotel guest regular, film director Francis Ford Coppola and features artworks from his personal collection, and also film memorabilia. Not to mention George Nakishima furniture by Knoll, Fortuny lamps and a stunning Carrera marble bathroom.

The hotel’s heritage and future as a creative hub are never far from view. In the lobby, guests can sit at a table with violin-themed legs by French-born artist Arman, who once left the unique piece of furniture in lieu of payment for his room, while he glass ceiling of the Le Saint Germain restaurant is now daubed with images, from a skeleton to a person in a spacesuit, by contemporary artist Fabrice Hyber.

In the elegant Bar Joséphine, floor-to-ceiling glass doors behind shelves of kaleidoscopic bottles invite people in from the street. ‘A new life is ready to unfold here,’ says Wilmotte. ‘I believe that people from the local neighbourhood will incorporate the hotel into their lives, tourists will discover something genuinely new, and the dream of the Lutetia will start again.’ From £750 per night, hotellutetia.com