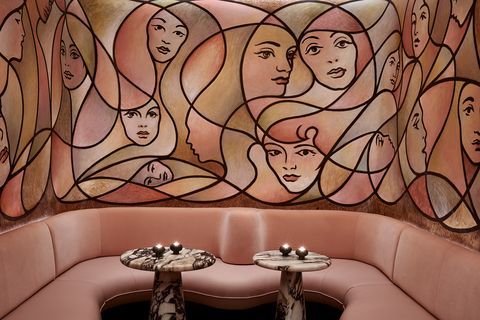 The evolution of The Berkeley hotel continues apace this summer with the addition of a new bar at the Knightsbridge landmark. It seems that one bar, judging by sibling grande dames Claridge’s and The Connaught, is never enough. The Berkeley Bar & Terrace joins the Blue Bar (which was expanded in 2017) as an alternative place at the hotel to sip a cocktail, or indulge in a rare whisky, rum or tequila.

The 40-cover bar is by Irish designer Bryan O’Sullivan, who cut his teeth working with industry luminaries renowned for their artisanal approach – like Martin Brudnizki, David Collins and Luis LaPlace – before establishing his own firm in 2013. It’s his first hospitality project in London, but his company Bryan O’Sullivan Studio completed the public areas of the Tamburlaine hotel in Cambridge last year, and there are more hotel projects in the pipeline.

A delicate vision of cream, soft pink and corals, the 40-cover space is lent a sense of cocooning, gentleman’s-club warmth by the richly veined marble and complex grained walnut wood panelling use throughout. The timber was taken from a 300-year-old tree felled from the Fulbeck Estate, Lincolnshire in the great storm of 2007. The tale of its provenance is represented in the pastoral form of plasterwork frieze, depicting flora and fauna which runs above the wooden panels in the bar.

The Berkeley Bar and Terrace offers a collection of intimate spaces connected by a series of Brutalist-inspired arches, which reference the home of the British Army’s Grenadiers, whose stables were originally located on the Wilton Place grounds where the hotel was built in 1972. These arches frame the bar at one end beautifully, where drinks are served from a half-moon marble-topped bar, with the premium spirits on the back bar dramatically back-lit by recessed lighting. A roaring hearth bookends the main room.

Intimate and secluded, The Snug is designed as a hideaway for private parties, with seating for up to nine guests and its very own call-for-service button. It is dominated by a large-scale abstract mural featuring women’s faces, a collaboration between O’Sullivan and New York artist TM Davy, it was inspired by the women-only nature of the original snugs when public houses were male domains.

The bar opens out, via glass doors, onto a small al fresco terrace with four tables, overlooking the neighbouring St Paul’s Church.

The Snug at the Berkeley Bar

‘I am honoured to have been asked to create this very special space for The Berkeley, famous for creating iconic bars,’ says Bryan O’Sullivan, ‘The rich history of the building provided a springboard of inspiration for what we hope is a timeless yet contemporary new edition to this London landmark.’

This content is created and maintained by a third party, and imported onto this page to help users provide their email addresses. You may be able to find more information about this and similar content at piano.io
Advertisement - Continue Reading Below
More From Travel
A design lover’s guide to Chicago
A design lover's guide to Bristol
Advertisement - Continue Reading Below
Inside House of Hackney’s Trematon Castle
The hottest new bars calling on a speakeasy spirit
Bibi serves brilliantly inventive Indian fare
Six Senses Ibiza calls on the island's calmer side
The hip hotel groups shaking up the face of travel
Inside The Londoner, the capital’s hot new hotel
Three of the best new vineyard hotels to book now
Port Hotel is an exciting addition to Eastbourne