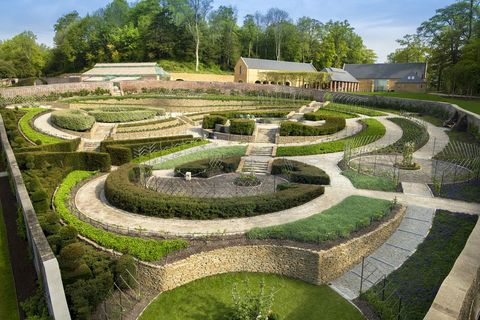 Possibly the biggest news in the British gardening world since Dutch plantsman and author Piet Oudolf opened his ‘Field’ at Hauser & Wirth in Somerset’s Bruton, is the makeover of Hadspen House – just a ten-minute drive down the road.

The 300-acre estate, now named The Newt, was already attractive to the green fingered: once the home of garden writer Penelope Hobhouse, it was then tended by Sandra and Nori Pope, renowned for their colourful planting.

Now under the ownership of Koos Bekker and Karen Roos, the duo behind famously chic farm, hotel and restaurant Babylonstoren, near Cape Town, the venue has been stylishly transformed, similarly to the South African mothership, where the eight-acre kitchen garden inspires the entire offering, The Newt’s gardens and apple orchards have been placed at the heart of the project.

Their seasonal produce informs the look of the hotel, located within the honey-hued walls of the Grade II-listed Georgian manor house, as well as the restaurant’s menu. An apple-tree maze occupies the ‘Parabola’, the curved walled garden, plus there’s cider making and a museum to explore.

With historically-inspired formal gardens, not to mention a spa, pool and shops stocked with local delights, from West Country cheese and meats to ceramics, candles and prints by Somerset-based artists, The Newt promises to be a destination like no other. Gardens open 10am–6pm, £15. thenewtinsomerset.com

This article first appeared in August 2019 issue of Elle Decoration