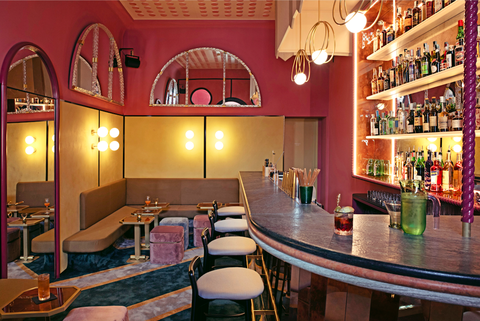 ‘I love historical Venetian architecture, there are a lot of references to the city in this space,’ says Italian designer Cristina Celestino, perched by the bar in her latest project, the new Experimental Cocktail Club in Venice. Part of Il Palazzo Experimental, the Experimental Group's newly opened boutique hotel housed in a Renaissance-era palazzo, the club is a jewel box-sized room accessed from the lobby via a mirrored door as well as directly from the street, but has its own very distinct style from the rest of the palazzo, which was designed by Dorothée Meilichzon.

‘The brief was quite loose – I was asked to to pay attention to the bar and the relationship between the bar staff and people walking past, both from the hotel side and the street side. The bar is not only a functional element but is also the point of contact between the customers and staff. Also the lighting – it’s a cocktail bar so the atmosphere is very important.’

Celestino studied architecture in the city and grew up just one hour's drive away from where we are sitting right now. As the designer’s first permanent space in Venice, it has a special significance for her and is like a love letter to the city – every detail is a subtle nod to Venetian culture. The bar counter is made from three layers of different colours of marble, a reference to the mix of coloured stones used in St Mark's Basillica, while the port hole- and arch-shaped windows and mirrors take their cue from Venetian churches. On the walls, three large mirrors made by Murano artisans and designed especially for the space are framed with traditional twisted glass.

The twisted shape is picked up again in the wooden structure framing the bar, which was inspired by four-poster beds and similar carved poles elsewhere in the building, and is crowned by a fabric-covered, oversized pelmet, another reference to the interiors of the city’s religious buildings. There’s also an homage to Venetian architect Carlo Scarpa in the form of Marmorino walls (a type of textured plaster) opposite the bar, which are framed with black metalwork. ‘He often used Marmorino with this metal frame in his interiors.’

‘For me it’s always a challenge to mix colours and materials,’ says Celestino, not that you'd know it from the complex palette of colours, textures and materials she’s expertly used here. ‘It’s a small space so it was not easy, but I wanted to have a mix between masculine and feminine shades.’ Walls are painted a muted raspberry sorbet-like colour, while the pale yellow Marmarino plaster is ‘a kind of desaturated mustard’. Rubelli fabrics were chosen for the upholstery for their terrazzo-like texture – another reference to Venetian architecture – but instead of specifying terrazzo for the floors, Celestino called upon her collaboration earlier in the year with Besana, an Italian carpet brand with whom she created an apartment for the Salone del Mobile in Milan, and installed a diagonal-striped gold and green carpet that continues up onto the walls like a skirting board (‘I like this continuation between wall and floor,’ she says).

Celestino has used several of her other designs in the space, such as the pendants over the bar, which she designed for Tuscany-based brand Esperia, and the poufs and low tables, both pieces for her own brand, Attico. ‘The shape of the table recalls cufflinks. With my work I often play with out-of-scale elements from different fields,’ citing jewellery as a recurring theme of hers. ‘Also the carpet – you often have this type of pattern on cufflinks,’ she points out. The overall effect is cosy, cocooning and welcoming: ‘I wanted to create a sophisticated, refined living room, open to the everyone in the city but not so open – like a hideaway,’ she says. Rest assured, it won’t stay hidden for long. palazzoexperimental.com cristinacelestino.com

This content is created and maintained by a third party, and imported onto this page to help users provide their email addresses. You may be able to find more information about this and similar content at piano.io
Advertisement - Continue Reading Below
More From Travel
Dorset's rocky coastline inspires Clifftops lodges
NoMad London is a luxury hotel with a storied past
Advertisement - Continue Reading Below
Fowey Hall Hotel is a contemporary gem in Cornwall
The best boutique hotels in the UK to book now
7 new design hotels by the beach to book for 2021
The 10 best design hotels of the last two decades
Hotel Les Deux Gares brings British flair to Paris
How Skye became a destination for design lovers
West African restaurant Akoko is an earthy delight
The best rural restaurants that serve up style