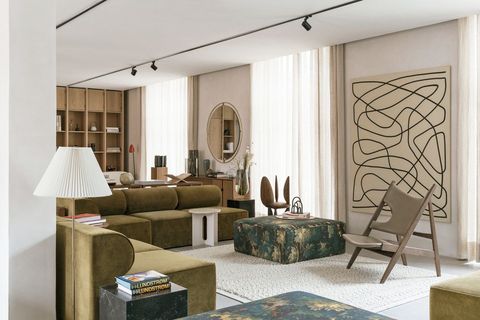 The compact Danish capital has truly become the city break destination of the moment, with travellers tempted by its blend of quaint, historic charm and Scandinavian cool. As a city with an admirable and internationally renowned design heritage, it’s not surprising that Copenhagen has a wealth of places to stay. And yet The Audo – the new hybrid hotel concept by Bjarne Hansen of much-loved Danish design brand Menu, which also functions as its headquarters and showroom – feels utterly new, thanks to its collaborative ethos and warm, textured take on Scandi style.

The 2,500-square-metre spaces sits behind the earthy red neo-baroque façade of a 1918 former merchant’s house in Nordhavn, an up-and-coming area that was once an industrial port and has been completely transformed in the last few years (a new Metro station is due to open next year, which will no doubt bring even more growth to the area). Jonas Bjerre-Poulsen and Peter Eland of local practice Norm Architects –and longtime Menu collaborator – were careful to preserve its original features, especially as it was one of the neighbourhood’s oldest buildings.

It houses a host of shared spaces, including a co-working area, concept store and café, alongside the 10-room boutique ‘residence’ on the upper floor. ‘The concept of The Audo is a hybrid,’ says Bjerre-Poulsen. ‘On the outside it has historical references, but on the inside, the building is a rational, industrial concrete structure that allowed us to transform it rather freely.’

Internally, the team – which includes Kinfolk founder and creative director Nathan Williams – has opted to evoke a refined ‘collector’s home’, where furniture, lighting and accessories by Menu sit alongside a curated edit of pieces from friends of the brand. The resulting mix has a harmonious, organic feel, lifted by warm caramel tones, cocooning armchairs upholstered in snuggly bouclé fabrics and potted plants and indoor trees. Walls of the airy lounge are decorated with artworks by a rotating series of artists, testament to The Audo’s zeal for the local creative community.

Each guestroom differs in design, but all share a similar serene aesthetic with distinctively Danish furniture. The colour palette in each is unique, running the spectrum of warm earthy shades, from chalky whites to pink-tinged terracotta and natural leather. Aiming to feel like a home-from-home rather than a hotel, rooms have been kitted out with an array of comforts; complementary mini bar and snacks, Aesop toiletries and Tekla towels and robes, while the beds are dressed with organic linens (most of which are available to purchase in the concept store downstairs). The restaurant is due to open in early 2020, but the lounge cafe already offers drinks, snacks and breakfast, the latter a selection of glossy pastries and wholesome sourdough and rye breads with artisan butter, cheeses and jams.

‘Our move to The Audo highlights the multidisciplinary, unifying nature of design, while serving as a showcase and testing ground for new concepts,’ says Joachim Kornbek Hansen, design and brand director of Menu. And with a space that promises to evolve in line with its revolving door of local innovators, there will be plenty of reasons for design lovers to return.

Rooms from £340 per night; theaudo.com

This content is created and maintained by a third party, and imported onto this page to help users provide their email addresses. You may be able to find more information about this and similar content at piano.io
Advertisement - Continue Reading Below
More From Hotels
Fowey Hall Hotel is a contemporary gem in Cornwall
Jonathan Anderson designs Hotel 1729 for Ruinart
Advertisement - Continue Reading Below
The Fife Arms reopens with new interiors
London's newest hotel - The Stratford
Mallorca’s new boutique hotel Can Bordoy
Soho House Mumbai opens
Hôtel Lutetia is restored to its former glory
The Shanghai Edition is an urban luxury retreat
The Retreat spa hotel in Iceland
The Jaffa