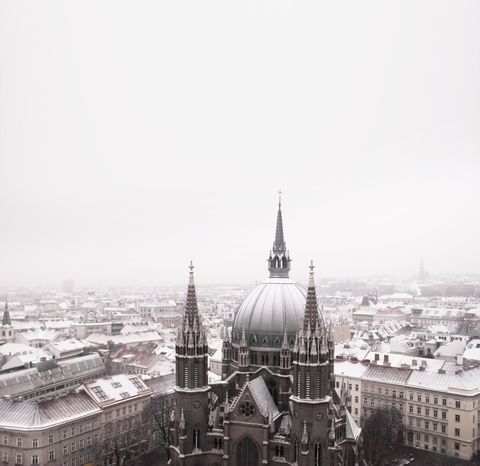 While a trip to one of Europe’s myriad Christmas markets isn’t compulsory, it would be a shame to miss Vienna’s. Its peerless baroque architecture, including the resplendent Schönbrunn Palace with its twinkling (and towering) Christmas tree forms a spectacular backdrop. And there’s plenty more than imperial majesty to the capital, which was recently declared the world’s most liveable city for the second year running by The Economist.A hotbed of musical, artistic and intellectual heritage – its loftiest former residents include Freud, Mozart, Klimt and Beethoven –modern Vienna has more tricks up its sleeve than superlative palaces and paintings; a revived restaurant scene, refined design hotels and inimitable café culture all play a part in its rich tapestry.

The Sir Terence Conran-designed Das Triest underwent an extensive renovation earlier this year, adding 49 rooms and sleek new Italian bistro Porto to its winning five-star formula. Named for its former life as a coaching station for travellers bound for Trieste, digs new and old are a lesson in muted elegance (from £131 per night; dastriest.at). Conran is also on top form at enviably central The Guesthouse, where Viennese design classics from Wittmann and Kiesler feel right at home and cosy window seats provide ample people-watching opportunities (from £165 per night; theguesthouse.at). Alternatively, play the room-number lottery at cheerful boutique Hotel Altstadt, where each striking suite is the creation of a different designer, artist or architect (£146 per night; altstadt.at). Or be among the first to slip into the signature Auping beds at the playful new Max Brown outpost 7th District – the brand’s fifth hotel – it’s the arty choice with its 480 original pieces and hand-painted mural by local artists (from £98 per night; maxbrownhotels.com).

A cup of coffee in Vienna is an occasion, and there are plenty of distinguished cafés to park yourself on a frosty morning. At beloved Café Prückel, mid-century design mavens can take a pew in the pastel-hued room refitted by Austrian architect/designer Oswald Haerdtl in the 1950s, while the rear wing has been restored to its turn-of-the-century splendour (prueckel.at). Elsewhere, a recent shift has seen master baristas and micro-roasters compete with the heritage coffeehouses and (whisper it) the coffee is said to be superior. Dubbed ‘the third wave’, those worth a try on the new coffee trail include innovative part-pastry shop, part-hair salon Gustav Emil Paula Paula, with its powdery pink marble tables and fluted timber counter (gepp.wien), and characterful Hildebrandt, where exposed walls are warmed by vintage rugs (hildebrandt.cafe). For brunch, the botanical majesty of 19th-century tropical glasshouse Palmenhaus is hard to beat (palmenhaus.at).

There’s more to Austrian cuisine than schnitzel and strudel, though you’ll find plenty of both. Among the city’s least clichéd culinary spots is Steirereck, where a cluster of mirrored cubic extensions – erected five years ago to appease the growing waiting list – reflect the leafy Stadtpark. It’s a formal affair, where the tasting menu is extensive and the waiters white-gloved, but it’s worth it for the #17 slot on the World’s 50 Best Restaurants list (steirereck.at). Bistro Skopik & Lohn is a good-luck charm for the up-and-coming Leopoldstadt area, and offers thoughtful twists on traditional dishes, such as braised lamb with couscous soufflé, broccoli and almonds. Its monochrome ceiling mural, courtesy of local artist Otto Zitko, is the most stylish scrawl around (skopikundlohn.at). For a late-night tipple, try underground hotspot Krypt – the cavernous 18th-century cellar, now host to a lengthy black marble and walnut bar, was discovered by accident during renovations (krypt.bar).

You can't move for masterworks among Vienna’s many galleries and museums, although contemporary art often feels secondary to some of the more stately sights. The Museum of Applied Arts (MAK) documents the history of design with a focus on social context. To mark the 200th anniversary of Austrian design brand Thonet, an extensive furniture exhibition ‘Bentwood and Beyond’ is open from 18 December 2019 to 13 April 2020 (mak.at). Head over the river due east and you’ll know when you’ve reached the expressionist Hundertwasser House; dubbed Austria’s answer to Gaudí, its artist originator Friedensreich Hundertwasser devised undulating floors, a vegetation-carpeted roof and a colourful façade. It’s closed to the public, but you can view his works at the nearby Kunst Haus Wien museum (kunsthauswien.com).

Make for the city’s concept stores, which offer a curated mix of smaller pieces to take home. Among the most impeccable edits are those at the airy, whitewashed Volta (voltavienna.com) and Die Sellerie, where designer duo Patrick Bauer and Georg Leditzky intersperse their own pieces with designs from Austrian makers (diesellerie.com). Furniture foragers should head to vast showrooms Die Glasfabrik (glasfabrik.at) and Vintagerie (vintagerie.at). Come November, Viennese tree decorations and treats offer a compelling reason to visit the city’s copious Christmas markets.

While Vienna in winter presents a persuasive argument for staying holed up in one of its elegant hotels, it’s refreshing to escape even the most liveable city. Many embark on lengthy cross-border excursions to Vienna’s European neighbours – Prague, Budapest and Bratislava are all within four hours – but gentler options include the Wachau Valley, which stretches for 24 miles west of Vienna. If you haven’t had enough of baroque wonders, stop off at Melk Abbey, which houses a spectacular library (stiftmelk.at). For wintery walks, the Vienna Woods just outside the city are an expanse of forest and vineyards dotted with warming wine taverns.