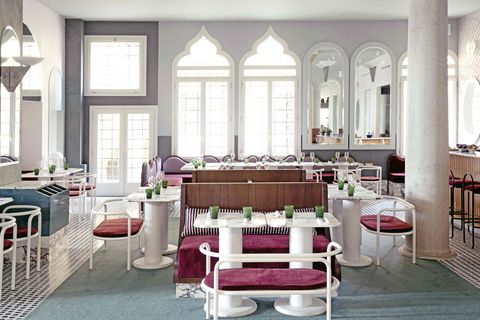 When school friends Pierre-Charles Cros, Olivier Bon and Romeé de Goriainoff were 18, they organised a New Year’s Eve party for their peers, inadvertently making a profit from the contributions of the attending revellers. But instead of heading straight to the nearest bar, the trio tripled their rewards at a nearby casino, then splashed out on a three-Michelin-star meal. Clearly, an appreciation for the finer things in life was present from a young age, and it’s this passion that led to the creation of one of the coolest hospitality brands around today – Experimental Group.

Its portfolio now includes hotels, restaurants (such as Balagan, below) and wine bars, plus an Ibiza beach club, but the catalyst was cocktails. Following school, the friends studied in Montreal and often took trips to New York. ‘It was the beginning of the new speakeasy trend and cocktail bars such as Milk & Honey and Little Branch were opening; it was like an epiphany. The drinks were incredible in terms of quality, craft and fresh ingredients. Returning to Paris, we realised things hadn’t moved on. People were still drinking lukewarm rum and coke. We were disappointed,’ says Cros.

With inspiration ignited, the process of seeking avenue in Paris began in earnest, while the trio embarked on learning mixology. ‘It took over a year and by the time we opened, news had spread by word of mouth.’ They settled on a bijoux space on the fringes of the Marais, and when the first Experimental Cocktail Club (or ECC) opened in 2007, it quickly became a beacon of Paris’s new cocktail scene. ‘We loved doing it; we were behind the bar, we were waiters, cleaners; we did everything ourselves. We opened more bars, then wine bars, restaurants and hotels, which was always the goal.’

The city’s influence can be seen in the design at Il Palazzo, Venice
Photographer Karel Balas

Grand Pigalle Hotel opened in the up-and-coming NoPi (north of Pigalle) district of Paris in 2015, followed by Henrietta Hotel in London and Hotel des Grands Boulevards, in another cool enclave of Paris. The last 12 months has seen a major gear change, with the group opening three hotels in quick succession: Experimental Chalet in Verbier in 2018 and Il Palazzo Experimental in Venice and Menorca Experimental in 2019. The team has a knack of picking buzzing neighbourhoods for locations, determined by its owners’ gut feelings. Cros says: ‘There has to be a strong bond with the destination, somewhere we have an affection for and that has character.’

‘We don’t like to be seen as a chain. People need to see that each place is unique’

Although it would have been tempting to apply a cookie-cutter approach to roll out its expanding empire, Cros says it’s precisely the lack of formula that sets them apart: ‘We don’t like to be seen as a chain. People need to see that each place is unique – we start from a blank page, every time. Designer Dorothée Meilichzon has created the interiors for each of the group’s hotels, but we never say, “OK, create us a package”. We like to extract the maximum soul and personality from the building and destination.’

Take the group’s latest venue, Il Palazzo Experimental inVenice, where the design heavily references the city’s motifs and architectural details, while staying true to a contemporary aesthetic. Housed in a Renaissance-era palazzo, which lay empty for years, many of the original features, such as the doors of the guestrooms, have been preserved and updated with gondolier-like maritime stripes. Terrazzo floors in the lobby are a nod to beloved local-born architect Carlo Scarpa, while sumptuous fabrics from Venetian-born brand Rubelli cover custom furniture in the rooms and cocktail bar (the latter conceived by Italian designer Cristina Celestino).

It’s a similar story at Menorca Experimental, which blends vernacular architecture and cool, contemporary design in a historic finca.The bespoke approach has paid off; part of the appeal for the group’s design-savvy, bon-vivant devotees is the local-flavour of each venue. ‘We always design our hotels to connect with the locals first to gain credibility and embed in the community. Hotel guests want to go where the locals are going,’ says Cros.

The sociable natures of the four owners (director Xavier Padovani joined the group later) have been the foundation for the brand’s culture, seeping into their passionate, fun-loving staff and the welcoming nature of their spaces. ‘Working with friends, is a great strength and it’s fun,’ agrees Cros. What’s next? ‘More hotels – I feel like we have momentum, we love what we do and we’re excited to tell more stories’. experimentalgroup.com

This content is created and maintained by a third party, and imported onto this page to help users provide their email addresses. You may be able to find more information about this and similar content at piano.io
Advertisement - Continue Reading Below
More From Travel
Fowey Hall Hotel is a contemporary gem in Cornwall
The best boutique hotels in the UK to book now
Advertisement - Continue Reading Below
7 new design hotels by the beach to book for 2021
The 10 best design hotels of the last two decades
Hotel Les Deux Gares brings British flair to Paris
How Skye became a destination for design lovers
West African restaurant Akoko is an earthy delight
The best rural restaurants that serve up style
Four stylish self-catering escapes to book now
The rise of the fashion restaurant