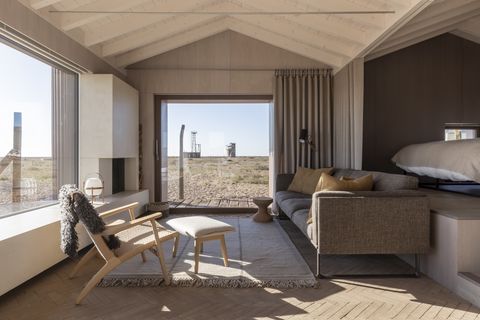 Why wait for warmer weather to make your escape? Whether the oft-promised snow turns up or not, there’s something special about the winter getaway – especially when it's spent in luxurious lodgings. Read on for our round up of the stylish digs we're hankering to hole up in this winter...

Crisp alpine air and snowy peaks are plentiful in Europe’s ski resorts, but stylish places to stay can prove more tricky to track down. Arula Chalets – the latest project from emerging British studio, 2am Design – is a modern gem in Austria’s Lech, where royals are regulars and ski passes strictly capped.

Comprising two lodges, available to rent separately or as one vast hideout, it elevates pine panelling with mid-century furniture and graphic artworks, plus modern luxuries such as their own spa areas, sun terraces and wine cellars, too. From £7,800 per night. arulachalets.com

Scotland’s north coast is said to be one of Europe’s last true wildernesses, and its heritage of warm hospitality makes for a winning formula. Just a 10-minute stroll from the village of Tongue’s seafront is Lundies House, where Anne and Anders Povlsen – billionaire founders of conservation project Wildland – called on Groves-Raines Architects to transform the 17th-century clergy house.

Inside, the fusion of Scandi and Scottish design is sensitive, with furniture from Danish brand &Tradition alongside locally sourced materials, while preserved period features lend a sense of place. Guests seeking solitude can quietly come and go, while those looking for local guidance will be well looked after. From £450 per night with breakfast. lundies.scot

Britain’s beaches can be unforgiving territory in the colder months, but it’s often when they’re at their bracing, brooding best. The vast expanse of Dungeness in Kent offers a dramatic winterscape devoid of the bucket-and-spade brigade; while loved by walkers – many come for late filmmaker Derek Jarman’s garden – you’re guaranteed a hefty chunk to yourself.

Hideaways for hire are few and far between, but a new collaboration between London studios MS-DA and Johnson Naylor has resulted in a covetable spot on the site of two ramshackle sheds: Radar, named for its past life as a1960s radar testing station, has a deceptively industrial shell, which gives way to a gentler interior of earthy tones, parquet floor and pale timber panelling. Cosy up by a window to take in the wildlife. From £637 for three nights. mulberrycottages.com

While Japan’s main island, Honshu, might be home to the country’s tallest peak – sacred volcano Mount Fuji – skiers will tell you the snow at smaller sibling Hokkaido is far fluffier. And there’s another reason to head north this winter; at the base of Mount Niseko-Annupuri is the hotly anticipated hotel Hinode Hills. Part of the wider complex of Niseko Village (dubbed Japan’s skiing mecca), access is naturally slopeside, and hiking and mountain biking are heralded in the off-season.

Its wabi-sabi-inspired interiors are pared-back but plush, and there’s a sleek in-house onsen (a Japanese hot spring) for restful après ski. A roster of 79 rooms, studios and suites offer neat configurations for groups, and the best boast vistas of neighbouring Mount Yōtei. From £304 per night. hinodehills.com

This content is created and maintained by a third party, and imported onto this page to help users provide their email addresses. You may be able to find more information about this and similar content at piano.io
Advertisement - Continue Reading Below
More From Travel
The hottest new bars calling on a speakeasy spirit
Bibi serves brilliantly inventive Indian fare
Advertisement - Continue Reading Below
Six Senses Ibiza calls on the island's calmer side
The hip hotel groups shaking up the face of travel
Inside The Londoner, the capital’s hot new hotel
Three of the best new vineyard hotels to book now
Port Hotel is an exciting addition to Eastbourne
7 new design hotels by the beach to book for 2021
Top photographers on taking the best travel snaps
Live like a collector at this Paris rental concept