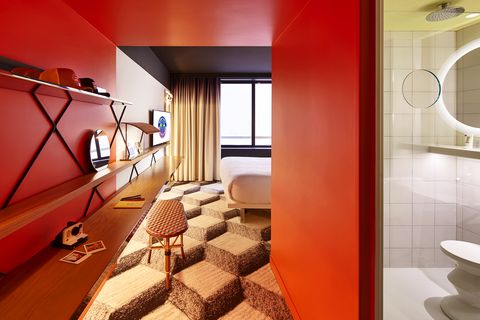 Rather neatly, Mama Shelter’s fourth French outpost is in the country’s fourth biggest city, though it’s one that still doesn’t draw the crowds it perhaps deserves. Charming Toulouse, with its laid-back riverside living, sunny southwestern weather and pinky-hued renaissance architecture (earning it the moniker ‘La Ville Rose’) is surely prime city break territory. And thus, it’s prime Mama Shelter territory, with the brand’s fun-loving approach to hospitality designed to help guests squeeze the most out of a long weekend.

This time, the flourishing French hotelier has converted a former cinema into a central 120-room hotel, just down the road from green Place Wilson. (A chic 45-seater in the basement, Le Cinemama, has been created in tribute, showing cult French films from Sunday to Wednesday.) Long-time brand collaborator – and Philippe Starck protege – Thierry Gaugain heads up the interior design, which (even by Mama standards) is unapologetically cheerful and cheeky: think bold geometric flooring, relaxed piles of mismatched cushions and a chalkboard ceiling that crowns its sprawling restaurant and bar area.

Though colour and pattern lie at the core of its visual DNA, Gaugain is careful to ensure its interior spaces never reach ‘cacophony’ levels – a winning formula that has seen the boutique chain deliver style at eminently reasonable rates. Part of the offering this time is a standalone shop – the chain’s first – which touts a curated edit of quirky objects (and travel essentials) alongside Mama Shelter-branded fare.

As with all Mama Shelter properties, a refreshingly transparent room hierarchy ranks each from ‘Small’ to ‘XXL’, topping out at a capacious 377 square foot space. All feature luxury bedding, a mini fridge, desk and sizeable TV, which shows free – and relatively recent – films on demand. Here, the moody hues of the original Paris property have been replaced with a vibrant orange, while bathrooms are graphic and sunshine-hued. Guests will be tempted to hole up in these stylish dens, but the hotel’s real draw depends on them venturing out: in a city that’s surprisingly lacking in roof terraces (though has plenty of sunshine hours in which to enjoy them) the expansive rooftop, open ‘til midnight, is a boon for travellers and Toulousains alike.