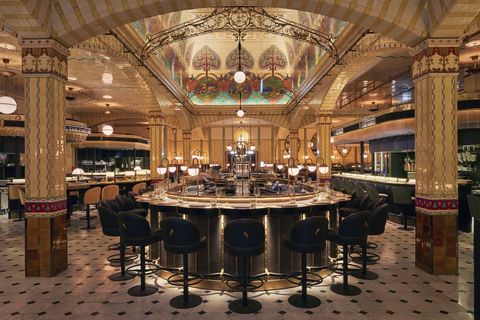 When Harrods’ Meat & Fish Hall first opened in 1903, it caused quite the stir. ‘It blew people away,’ says Sebastian Wormell, resident archivist for the Knightsbridge megastore. ‘There was simply nothing like it as a retail space in London.’ The elaborately tiled interior, conceived by Yorkshire Arts and Crafts ceramicist and artist William Neatby*, was of course ridiculed; ‘Why create such an interior for a mere shop?’ naysayers scoffed.

But aesthetes admired the detailed design of the art nouveau-inspired room, which was completed in just nine weeks and originally featured a glass roof that flooded the space with natural light. The ornate frieze displaying pastoral scenes of sheep and fish, as well as colourful glazed tiles – designed by Neatby and produced by Doulton & Co, who later became Royal Doulton – impressed the critics. The hall was even featured in a revered Viennese arts magazine, which likened it to a church complete with side aisles and nave.

In the intervening century, the space has undergone many transformations. Archival imagery from the 1920s shows a room so filled with plucked turkeys at Christmas, you can barely see the interior. The 1970s were dire, while at some point during the 1990s, the grand hall contained questionable sculptures. Today, the Grade II*-listed interior is back, restored to its full gilded glory and transformed into the 200-cover Dining Hall by renowned experts in reviving historic London interiors, David Collins Studio. The third phase of a two-year regeneration of Harrods’ food halls, and undoubtedly the jewel in the crown, the Dining Hall will present shoppers with a chance to pause for a drink at the central Wine Bar, or dine from five food counters that line the room’s periphery.

Wormell is visibly chuffed by the renovation when we meet in the newly unveiled Dining Hall with Simon Rawlings, creative director of David Collins Studio. For Rawlings, though, there were many challenges to overcome in transforming the historic interior, not least the practicalities of installing five kitchens to serve each of the individual food counters. ‘It was important to respect what was here, but also do something new for retail,’ says Rawlings, who is well practised in the sensitivities of modernising heritage properties. ‘I wanted to retain the sense that this is a hall, though I was aware that spaces full of design and detail can be overwhelming. We created pockets of smaller environments to enable diners to enjoy the food and company, while being able to take in the grandeur of it all.’

’IT WAS IMPORTANT TO RESPECT WHAT WAS HERE, BUT ALSO TO DO SOMETHING NEW FOR RETAIL’

The oval-shaped Wine Bar, with its beautiful scalloped edge, anchors the room, while the individual counters – The Fish Bar, The Pasta Bar, The Grill, The Sushi Bar and Kama by Vineet Bhatia – are defined by subtle designs that frame each kitchen. ‘It was essential to have discreet differentiation around the room,’ says Rawlings. For example, The Fish Bar features a fringe of tiles that resemble scales, The Grill is adorned with brasserie-like rodded glass, while The Pasta Bar is decorated with Murano glass discs.

What truly brings the room to life, though, is the glamorous lighting. ‘With technological advancements, we can now light rooms in a more modern way,’ Rawlings explains. There are multiple light sources around the room, with every counter flaunting several layers of illumination: recessed for drama, a source to highlight food and glowing table-top lamps. In a nod to the hall’s 1920s heyday, globes are a central motif, though it is the carefully orchestrated domes that send a mesmerising wash of light over the intricate tile work.

The tiled ceiling was a rarity at the time, according to Wormell: ‘Neatby wrote about using tiles on the walls and ceilings and how Doulton would groove the backs to aid sticking.’ Despite lasting remarkably well, some restoration work was required. David Collins Studio called upon the expert is of Craven Dunnill Jackfield, who they worked with previously on Harrods’ Roastery & Bake Hall and Fresh Market Hall. Specialists in Victorian techniques, the company repaired and replicated areas where original tiles were damaged or missing, such as the gilded cartouches featuring pheasants.

The toughest feat for the firm was matching the plain coloured tiles though. ‘The ceramic industry is on its knees in terms of raw supply,’ explains Adrian Blundell, production director of Craven Dunnill Jackfield. ‘Trying to match a historic colour and find stains of pigments is getting harder. In the Dining Hall, there are lots of chevrons in acid green and white; it took weeks to find the green.’

Currently at concept stage is the restoration of the fourth and final hall. Due to be completed in early 2020, the hall that once sold fruit, flowers and vegetables is to become the Chocolate Hall. ‘It once had a double-height atrium and mezzanine, so we can probably do something quite lovely in the centre,’ Rawlings muses. ‘The existing tiles are very colourful and detailed, while chocolate is brown and the packaging vibrant – so it might be hard to elevate it all.’ Judging by the studio’s progress so far though, we’ve no doubt they will rise to the challenge.

Barnsley-born Neatby trained in architecture, but segued into decorative arts, design and illustration. As a William Morris admirer, Neatby worked in metal, enamel and glass, also producing furniture and wallpapers. While running the architecture department of Lambeth’s Doulton tilemakers, he oversaw some of their most famous designs. His work can be seen in The Royal Arcade Norwich, Leicester’s Turkey Café and Bristol’s Edward Everard Building.

This content is created and maintained by a third party, and imported onto this page to help users provide their email addresses. You may be able to find more information about this and similar content at piano.io
Advertisement - Continue Reading Below
More From British Design
The best bespoke furniture makers in the UK
Urban Splash: property developer with a difference
Advertisement - Continue Reading Below
The 4 British craftspeople making woodcraft cool
Jonathan Saunders debuts furniture collection
London Craft Week launches Virtual Preview
The Conran Shop opens in Seoul
Meet Custhom design studio
10 British interior designers to know right now
Seven stylish British stationery brands to know
Such Stories are reinventing the white tile