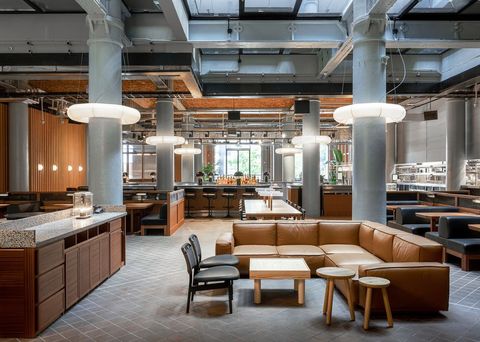 When you already have one of the coolest restaurants in London, where do you go next? For Pablo Flack and David Waddington, the pair behind Bistroteque, the east London fashion crowd’s favourite since 2004, it was obvious. ‘Manchester was a no brainer. It has strong cultural underpinnings and is full of creative individuals,’ says Flack of new venture Cultureplex. ‘We hope it becomes a community centre for those same people too,’ he adds.

The restaurateurs, who hail from Yorkshire, know the city well, having partied there during its halcyon ‘Madchester’ days. But that was 30 years ago and, although Cultureplex shares the similar 19th-century redbrick architecture, a far more sophisticated experience awaits. The pair couldn’t believe their luck when they secured a vast 15,000-square-foot area on the ground floor of a former goods warehouse, located on the outskirts of the vibrant Northern Quarter. They called upon New York design agency Love Is Enough to transform the listed interior into a Bistroteque restaurant, lounge bar, coffee counter, cinema and multipurpose events space complete with its own cultural programme.

Loren Daye, the founder of Love Is Enough, spent time in Manchester, soaking up the city. ‘I am most interested in creating places that are deeply contextual,’ she says. ‘This takes time in new cities, listening to buildings and communities.’ And Daye should know – she’s gained plenty of experience doing just that, having created five Ace Hotels across the globe as the brand’s creative director.

In fact, there’s a definite Ace Hotel-like quality to the space with its laid-back, convivial attitude, buzzing atmosphere and ability to flex to visitors’ needs – groups of friends catch up over cocktails on sofas, while the city’s creatives sit beavering away behind laptop screens elsewhere. The roster of events spans music, workshops and talks and film, some free for all to enjoy; on any given day you might find a live pianist playing, a DJ set in full swing, or wine tasting at the bar. Also in the building is a branch of hip gym and yoga studio Blok, the first outpost outside of London, while upstairs is Native, a short-stay serviced apartment hotel. In spring next year, an outdoor terrace will open alongside the canal at the back of the building, adding yet another space for visitors and locals to enjoy.

‘MANCHESTER WAS A NO BRAINER. IT HAS STRONG CULTURAL TIES AND IS FULL OF CREATIVE INDIVIDUALS‘

For the interiors, Daye has drawn upon the industrial heritage and ‘robust history’ of the site, which was built in 1867 by the Manchester, Sheffield and Lincolnshire Railway. She says, ‘We made the building the protagonist in the story and introduced layers that would work with the existing terracotta bricks and soft pale blue of the columns and structural steel. It was a challenge to build a new joinery language that could meet the building’s beefy size, but chunky timber and calm-inducing Douglas fir panelling were perfect.’

Inspired by Pierre Adolphe Valette’s impressionist portraits of Manchester, the palette is soft and muted, with black and a liberal dose of greenery. Through each space, there’s an artful and interesting palette of materials at play, including cork, leather, terrazzo, brick and aluminium to name but a few. Daye also ensured the design reflected the city’s fabric, seeking out local craftspeople and suppliers, from Standard Pottery for lamps, and Darwen Terracotta and Faience for glazed tiles.‘Visiting Faience’s glaze sample room was a highlight. I had heart palpitations for days,’ says Daye. Let’s hope Cultureplex induces the same excitement for Mancunians and visitors alike. cultureplex.co.uk studioloveisenough.com

This content is created and maintained by a third party, and imported onto this page to help users provide their email addresses. You may be able to find more information about this and similar content at piano.io
Advertisement - Continue Reading Below
More From Restaurants
14 of the UK’s most stylish restaurant terraces
Meet the designer behind Booking Office 1869
Advertisement - Continue Reading Below
The hottest new bars calling on a speakeasy spirit
Bibi serves brilliantly inventive Indian fare
West African restaurant Akoko is an earthy delight
The best rural restaurants that serve up style
The rise of the fashion restaurant
Zero waste restaurant Silo opens in London
Former supper club Paradise opens in Soho
Retro Italian flair abounds at Locket’s