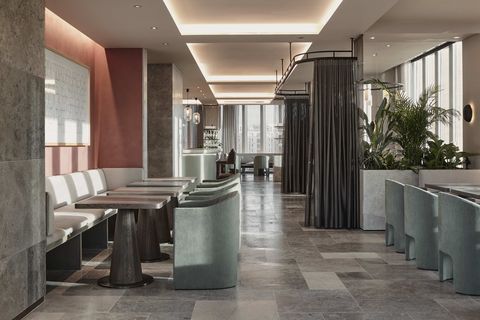 Perched on the seventh floor of the recently opened The Stratford hotel, Allegra is the latest project from developer Harry Handlesman, creator of the St Pancras Renaissance Hotel a Chiltern Firehouse. Overlooking the ever-changing, urban landscape of east London and the glittering lights of the City beyond, the restaurant feels a world away from the hubbub of Stratford below – stepping from the lift you’re cocooned by soft lighting and a palette of gentle neutral shades, courtesy of design duo Space Copenhagen (who are behind the first Noma restaurant as well as the award-winning 11 Howard hotel in New York).

Allegra is designed in harmony with the rest of The Stratford, featuring pieces from Space Copenhagen’s ranges for the likes of Stella Works, &tradition and Gubi. ‘We wanted to create a seamless flow between spaces and their different functions, and a feeling of generosity towards both the residents and guests’ say the design duo, who have evoked a quiet and understated sense of luxury throughout. Materials have been carefully chosen to add warmth and comfort to the sleek, newly built space – think canework, beautiful timbers, and tactile natural fabrics such as linen and brushed suede.

The restaurant has an expansive terrace with immaculately landscaped gardens and sweeping vistas of the city's rapidly developing skyline, as well as an outdoor fireplace and kitchen. For Space Copenhagen, ‘a sense of connection between indoor and outdoor’ was intentional – greenery adorns shelves and potted plants are peppered between tables while the space is overflowing with daylight. Describing the interior as ‘refined yet relaxed’, Space Copenhagen aimed to complement the menu with an aesthetic that they sum up as ‘urban elegance and sophisticated simplicity’.

At the helm of the kitchen is chef Patrick Powell (previously at Chiltern Firehouse), whose inventive, seasonal and wholly comforting cooking feels at one with the welcoming ambience of the space (the soda bread is a must-try), with ingredients supplied by Pale Green Dot farm in Sussex, where Allegra has secured its own land.

A beacon of promise for what’s to come in the area ahead of the openings of the V&A East project in 2023 and Sadler’s Wells East in 2022, tables will surely be tricky to come by as London catches on to this burgeoning area. Book while you still can. The Stratford Hotel, Queen Elizabeth Olympic Park, 20 International Way, London E20 1FDAllegra-restaurant.com