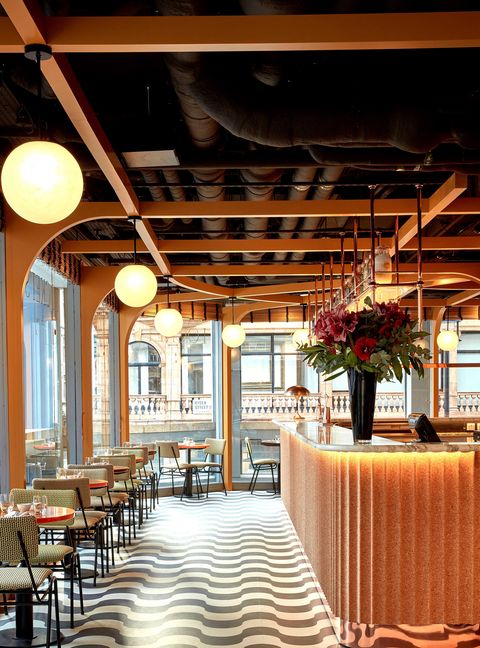 For all its polished boutiques and smartly stuccoed façades, London’s St James’s has a few too many bustling neighbours on its fringes – think Leicester Square and Piccadilly Circus – to capture anything resembling true calm. New all-day cafe and wine bar Locket’s, named for owner (and great-granddaughter of Wilton’s restaurateur) Locket Hambro, is one of the most stylish sanctuaries around.

Perhaps it’s the fact that diners – and drinkers – are perched above street level, with floor-to-ceiling windows that frame the area’s handsome architecture. The light-filled space is housed in Smithson Plaza (named for the celebrated architect couple Alison and Peter Smithson who designed the original building in 1964) which was the brutalist former home of The Economist for half a century and has now been sensitively extended by in-demand studio Fran Hickman Design & Interiors.

Inside, Hickman’s inspirations are diverse yet deliberate. The undulating monochrome polyvinyl flooring is a reference to modernist Milanese residence Villa Borsani, plus another of the Smithsons’ projects: Watford’s iconic Sugden House, said to be the UK’s first postmodern home. The fluted cork bar, alongside bespoke amber resin table tops and globe pendants, lend the space a sense of warmth, while nodding to early 1970’s influences. Neat pairings include seating upholstered in fabrics inspired by the archive at Tibor, a family-owned textile house that still weaves on handlooms, and a back wall is flanked by banquettes in pale teal leather. A visit to the loos reveals joyfully tiled walls: shades of moss green, lemon and burnt umber add retro Italian flair.

It’s an all-day affair at Locket’s, but that day is divided into three menus, each loaded with small plates. Inventive breakfast fare ranges from a distinctly Scandinavian dish of shrimp on rye bread to a bacon brioche bun, while there’s roast cauliflower with tahini and red pepper tapenade or raw beef with salted egg yolk and truffle on the dinner menu. For an area lacking in casual spots to dine (and drink), it could be a winner. Smithson Plaza, 25 St James’s St, SW1A 1HA; locketslondon.com

This content is created and maintained by a third party, and imported onto this page to help users provide their email addresses. You may be able to find more information about this and similar content at piano.io
Advertisement - Continue Reading Below
More From Restaurants
The hottest new bars calling on a speakeasy spirit
Bibi serves brilliantly inventive Indian fare
Advertisement - Continue Reading Below
9 of the UK’s most stylish restaurant terraces
West African restaurant Akoko is an earthy delight
The best rural restaurants that serve up style
The rise of the fashion restaurant
Zero waste restaurant Silo opens in London
Former supper club Paradise opens in Soho
Space Copenhagen's Danish cool comes to Stratford
New restaurant Vardo is the latest London hotspot