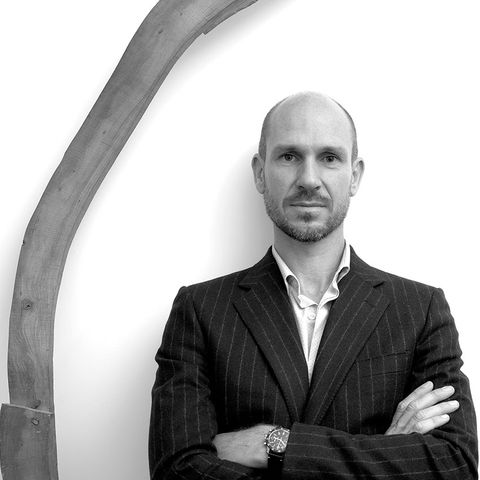 Who is he? French interior designer Tristan Auer studied at Penninghen, the school of interior architecture in Paris, before stints working for designers Christian Liaigre and Philippe Starck. ‘I learned different things from each,’ recalls Auer. ‘With Christian, it was all about the attention to detail – it was a question of millimetres when doing a seam or piping. Working for Philippe was more about scenography and the feel of a space.’

In 2002, Auer set up his own design studio. His first project was the interior design of singer Bryan Adams’ beach house in Mustique. ‘He launched my career by introducing me to all the fashion people and rock stars on the island.’

How does he describe his aesthetic? ‘Made to measure,’ he says, explaining: ‘my style and the materials I use change according to each project.’ Yet, there are elements – such as high levels of craftsmanship, elegance and a balance between preserving the old and introducing the new – that remain consistent whether Auer is designing a hotel in Moscow or an apartment in central Paris.

‘Sensuality is important,’ he says. ‘When you sit on a sofa, you should be able to close your eyes and feel comfort.’

He also puts an emphasis on the ‘way a space flows’, listing his inspirations as fashion haute couture and luxury. ‘Sensuality is important,’ he says. ‘We judge too much on what we see. When you sit on a sofa, you should be able to close your eyes and feel comfort.’

Where are his most notable projects? Auer redesigned the public spaces at the Hotel de Crillon in Paris, which re-opened in 2017 after a four-year renovation. ‘The interior design mixes different styles and periods, from the classical 18th-century to the contemporary – for me, that’s what makes it very rich,’ he says. Everything, from the furniture to the textiles, is bespoke and has been made by French craftspeople. Auer also designs bespoke furniture for brands such as Christophe Delcourt and Holly Hunt, including the ‘Edie’ sofa.

What is he currently working on? Projects include a 50-storey residential tower in Dubai, and the Hotel Temple in Le Marais, Paris, which will open in 2019. ‘The eclectic interior will be inspired by the 16th-century neighbourhood,’ explains Auer. In September, he branched out into designing interiors for vintage cars (the new venture was launched via Instagram: @tristanauer_cartailoring) and he has already completed four vehicles, including a 1973 Citroen for the Hotel de Crillon.