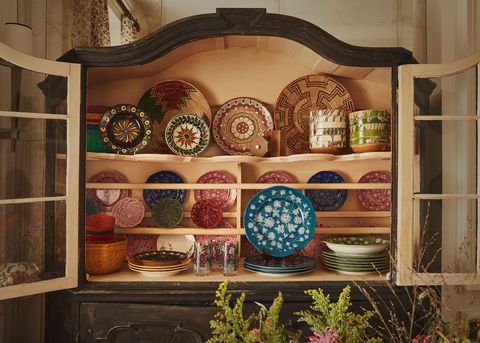 It’s shaking up to be a festive season full of pattern and colour judging by the current trend of pop-ups in the capital. First, Milan-based style maven JJ Martin brought her vivacious brand of La DoubleJ womenswear and home accessories to Matches townhouse, and now another tastemaker with Milan connections has launched a holiday season pop-up nearby in Chelsea. Martina Mondadori, founder of Cabana Magazine and Cabana Homeware and scion of the Italian publishing dynasty Mondadori, has just returned for the second year running to Paolo Moschino for Nicholas Haslam in Chelsea with her curated edit of eclectic tableware and crafts.

Cabana pop up at Paolo Moschino for Nicholas Haslam
Cabana

The collection includes the new Wes Gordon for Carolina Herrera tableware, Mexican embroidered placemats and napkins by Cabana x Mi Golondrina and dinnerware by Cabana x Casa Lopez, also expect one-off Tribal Art pieces and handwoven baskets. In addition, Cabana and Paolo Moschino are releasing 10 wallpaper designs by celebrated Italian architect and designer Lorenzo Mongiardino who created highly decorative residences in the 1970s and 1980s for major names such as the Agnellis, Hearsts, Radziwill, Rothschilds and Mondadori’s to name a few), discovered by Moschino when visiting the archives of San Patrignano in Italy. ‘Paolo is an old friend of mine and the fact that he has installed the same Mongiardino wallpaper my mum has in her Milan home was too irresistible,’ says Mondadori.

Glassware and embroidered table linen at the Cabana pop up
Cabana

The wallpapers are made by recovering addicts in the rehab community of San Patrignano, which was created in the middle of the 20th-century by the Moratti family who had been clients of Mongiardino. ‘They invited him and his artisans in the 1980s to do workshops for their young patients as a way to overcome addiction. The tradition and the craftsmanship is still alive today and Paolo Moschino is the exclusive distributor. It’s one of those great Italian stories the world should know more about,’ she says.

A huge fan of layering vintage fabrics, collectables, colours and patterns in her own Chelsea townhouse, Mondadori predicts a general shift in interiors from ‘a more tribal trend to a more bohemian one.’ For anyone looking to channel such an eclectic look, this pop up is certainly a good place to start. What’s more, Mondadori says a permanent Cabana store is also in the works.

This content is created and maintained by a third party, and imported onto this page to help users provide their email addresses. You may be able to find more information about this and similar content at piano.io
Advertisement - Continue Reading Below
More From Italian Design
The Minotti story: family, furniture and finesse
Design hero: Italian maestro Gianfranco Frattini
Advertisement - Continue Reading Below
This new furniture collection is on our wishlist
Italian design showcase i-MADE goes digital