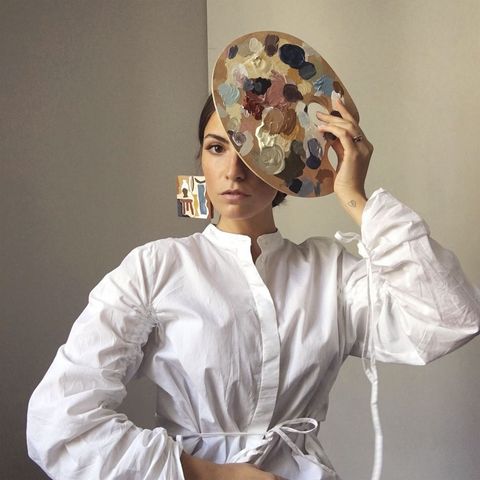 French aesthete Garance Vallée, who goes by the Instagram persona of @royalgarance – a name she says began as a joke – is an artist and designer who works across several mediums. The sketches and surreal sets that appear on her feed are like a parallel universe; one that’s struck a chord with the desire for simplified spaces with well-curated objects. Vallée refuses to be pigeonholed: ‘I am not a solid to be put in one box, I am like a liquid that spreads into a lot of boxes, keeping a connection with them all. I try to create bridges between all of my worlds.’

Vallée studied at the École Nationale Supérieure d’Architecture de Paris-LaVillette. It was her love of drawing and fascination with creating three-dimensional surfaces from two-dimensional plans that led to a master’s degree in scenography and architecture, as she was keen to bring her imaginative world to life.

Her big break came in 2018 when Italian PR Martina Gamboni commissioned her to produce an imaginary space at her creative agency headquarters for MilanDesign Week. Entitled ‘Terra’, it referenced past civilisations of Ancient Greece and Rome in a terracotta palette. Since then, Vallée has been enlisted to produce set designs for brands Comptoir des Cotonniers and Vivetta.

Vallée credits her artistic upbringing as a strong influence. Her father is the punk artist Kriki, who was part of the 1980s Parisian underground street-art scene and a member of the electro-punk group Les Envahisseurs. His graphic art often features the part-human, part-robot character ‘Fuzz’ and a near dystopian world. Vallée explores similar themes in her pieces. Although they never include people, they always include a sign of life, be it a discarded scarf or a pot on its side – otherworldly but with touches of reality.

Ironically, these illusions are now being brought to life. Prototypes from her sets are due to go into production and a range of wallcoverings and vases is planned, details as yet to be revealed. Her artworks, however, are available from Paris’s Amelie Maison d’Artand Swing Design Gallery in Italy. garancevallee.com; amelie-paris.com; swingdesigngallery.it