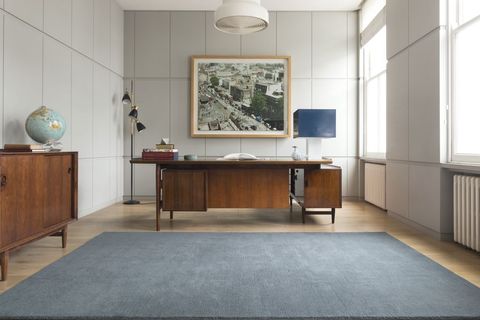 In a book published in 1810, Johann Wolfgang von Goethe wrote that only ‘savage nations, uneducated people, and children’ enjoyed vivid colours. He is far from the only person to believe intellectual and aesthetic purity are best expressed in monochrome: Le Corbusier, John Pawson and Steve Jobs have all flirted with this idea. Belittling colour, though, seems obtuse.

The ability to discern different hues is thought to have given our ancestors an advantage: they were better able to distinguish ripe fruits amongst dense leaves. In the millennia since, their descendants have faithfully used their colourful vision not only to seek out and make dyes and paints of every shade imaginable, but to clothe themselves and their homes with them, too. Indeed, colour is so ingrained in our psyches, there is even evidence that we can use it to alter our moods.

In 1979, Alexander G Schauss, an American psychiatrist, announced that he had discovered a way to switch off criminal aggression. The secret, he said, was a shade known as Baker-Miller pink (above). Tests on men presented with blue or pink cards seemed to show that, if exposed to the latter, their strength and willingness to fight evaporated. Schauss’s findings are still put into practice today, with prisons in the US and Europe painting cells pink. Furthermore, Kendall Jenner recently painted a room in her home Baker-Miller: she’d heard that it can suppress appetite.

If you are looking to get fired up, red may be the answer. The Villa of Mysteries – a Roman villa near Pompeii famed for its unusual frescos and destroyed by the eruption of Vesuvius in 79AD– contained a room which had walls doused in expensive vermilion. Decorating with so much red suggests a desire to create a strong reaction.

Vermilion mural in The Villa of Mysteries, Pompeii.
Getty Images

Indeed, the colour red is also linked to improved focus. In one study, researchers at the University of British Columbia tested the effects of exposure to red and blue and found that people looking at a red screen were better at memory and proof-reading tests, while those shown blue performed better at more creative tasks. If you require both characteristics, try decorating using rugs by Farrow & Ball for The Rug Company (top); tax returns could be filed atop one in ‘Keepers Red’, while conversations would sparkle in a living room lined with a rug in ‘Wooster’ blue.

Green, like pink, is often linked with calmness and serenity, perhaps because of its association with nature. The Japanese practice of shinrin-yoku (forest bathing) – spending time in green environments – has been found to lower blood pressure, blood glucose levels and stress hormones. In fact, it’s been part of the Japanese national health programme since 1982. The abundance of leafy wallpaper designs sprouting up on the high street of late attest to the lasting power of green – try ‘Royal Fernery’ from Cole & Son or ‘Hassel’ in dark green by Sandberg.

Of course, responses to colour vary from person to person and culture to culture. Byzantine kings associated deep purple with royalty and insisted their wives give birth in rooms paved with the plum-toned rock porphyry; in China, a rich golden yellow was the favoured imperial hue.

The link between a shade and a mood can be learned – an effect known as conditioning. If you have a strong memory or mood associated with a hue, it’s likely the result of repeated exposure to it in a particular context. If your childhood bedroom was yellow, for example, this colour will continue to have strong emotional resonance for you. It’s best to work with such emotive habits rather than against them. The shade from your childhood bedroom would likely still work well, as it would encourage a feeling of security and help you fall asleep more quickly. It would be a bad choice for an office, where you want to feel alert.

The yellow roof of The Forbidden City, China
Getty Images

No matter what your favourite shade, colour is essential: while an all-white room can look wonderful, an all-white home would soon begin to pall. The American heiress Gloria Vanderbilt once wrote that ‘Decorating is autobiography’: few would want their home to be a blank page.

This content is created and maintained by a third party, and imported onto this page to help users provide their email addresses. You may be able to find more information about this and similar content at piano.io
Advertisement - Continue Reading Below
More From Decorating
The ultimate guide to exterior paint
Colour theory: a spectrum of decorating ideas
Advertisement - Continue Reading Below
A guide to terrazzo: everything you need to know
18 of the best Berber-style rugs
8 rules for decorating with Farrow & Ball colours
Jack Lenor Larsen: master of mid-century fabrics
Paint every room with colours by ELLE Decoration
Rose O'Neill’s unexpected feminist icons
Wood flooring: everything you need to know
19 cheerful decorating updates for a happy home