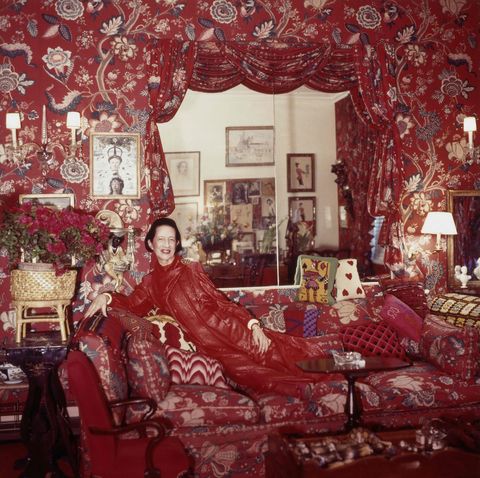 In the famous photograph of Diana Vreeland, she smiles down the lens, regal and supine, in a room that is a veritable symphony of red. From the crimson chinoiserie walls, lacquered doors and vermilion chairs to the slash of scarlet on her lips.

Her daring decorating choice, although unashamedly theatrical, really did reflect her preference. (She had her office at the Metropolitan Museum’s Costume Institute decorated in the same hue.) ‘Red,’ she once said, ‘is the great clarifier: bright, cleansing and revealing. It makes all colours beautiful. I can’t imagine becoming bored with red – it would be like becoming bored with the person you love.’

Vreeland’s dizzyingly successful career in fashion – she spent 26 years at Harper’s Bazaar, nearly a decade as editor-in-chief at Vogue and 14 years at The Met – was born from an unhappy childhood. Her parents, especially her mother, favoured Diana’s younger sister, and were not shy about letting their daughters know it.

‘Parents’, Diana wrote, ‘can be terrible.’ Like many miserable children, she was prone to flights of fancy, a trait she carried with her into adulthood.

Her autobiography, DV, features a childhood in Paris involved with the Ballet Russes; she was, in fact, raised in New York. Still, her boundless creativity, her sense of style and theatricality, was a match for the moment. During the dreary 1930s and war-torn 1940s, people wanted escapism.

‘Red is the great clarifier: bright, cleansing and revealing. It makes all colours beautiful’

Her ‘Why don’t you..?’ column for Harper’s Bazaar, her first job there, was ridiculous, extravagant and an immediate sensation. ‘Why don’t you... own 12 diamond roses of all sizes?’ ‘...Rinse your blond child’s hair in dead champagne to keep it gold, as they do in France?’ ‘...Use pineapples for decoration?’

She brought the same vim to her later, more exalted roles. As fashion editor, she worked with photographers such as Louise Dahl-Wolfe and Richard Avedon, shooting couture in a whole new way, presenting style like art.

‘Vreeland,’ Avedon later said, ‘invented the fashion editor. Before her, it was society ladies who put hats on other society ladies.’ Not that she shied away from making the most of her society connections and legendary charm.

She enticed stars, old and new, onto her magazine’s pages: Mick Jagger, the Kennedys, Wallis Simpson, Jane Birkin and Twiggy. She was also extravagant– it was this that got her fired from Vogue – but, as she would have undoubtedly said, some things are not worth compromising on.

At any rate, she refused to learn the lesson. At The Met’s 1976 Diaghilev exhibition, she insisted that Chanel’s ‘Cuir de Russie’ perfume be used to scent the air to get visitors in the mood. She remained, right up to her death, fascinating, memorable, stylish and fun-loving. And naturally, like her signature colour, never boring.

Colour theory: a spectrum of decorating ideas
Inventive uses of colour in a joyful Milanese home

This content is created and maintained by a third party, and imported onto this page to help users provide their email addresses. You may be able to find more information about this and similar content at piano.io
Advertisement - Continue Reading Below
More From Colours
How to add colour and character to your bathroom
Created by
Ideal Standard
Studio Peake on how to update country house style
Advertisement - Continue Reading Below
Why to buy and how to apply limewash paint
6 easy ways to add drama and impact
Created for From ELLE Decoration for Created by ELLE Decoration for
DFS
Colour theory: a spectrum of decorating ideas
Elsa Schiaparelli and the power of shocking pink