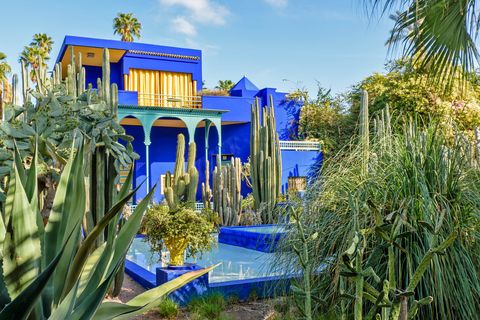 The French – and French men in particular – have form when it comes to the colour blue.

In the 12th century, Abbot Suger of Saint-Denis was inspired by the idea of creating buildings pierced by ‘heavenly light’. That his vision bore fruit can be seen at the cathedrals of Saint-Denis and Chartres, with their vibrant windows, many stained a vivid blue using tiny amounts of cobalt.

French kings adopted blue as one of the colours of the royal house.

Much later, the 19-year-old artist Yves Klein was lying on the beach with his friends. Looking up at the cloudless sky, he imagined himself floating up and signing his name on the reverse, just as if the sky was a canvas of his own creation. And then, of course, there’s Jacques Majorelle.

Jacques grew up in the shadow of his father’s fame. Louis Majorelle was a prolific and much-admired art nouveau designer, renowned for his curvaceous furniture. Even when his son showed precocious talent of his own, exhibiting paintings at the Salon des Beaux Arts in 1908 when he was just 22, Jacques would, in France, always remain the fils to Louis père.

Perhaps this played a part in why Jacques fell so deeply in love with, and later moved to, Morocco. It was certainly here that his creativity found its fullest expression. He was entranced by the colours, the smells, the people and the landscapes: paintings of street scenes, souks and kasbahs exploded from his paintbrush. His most consummate work of art, though, was his garden.

What began in 1923 with four acres at the edge of a palm grove in Marrakech became an obsession and the work of which he was most proud. ‘[It] is a momentous task,’ he wrote, ‘to which I give myself entirely. It will take my last years from me and I will fall, exhausted, under its branches, after having given it all my love.’

Cacti, coconut palms, agaves, ferns, lilies, bougainvilleas, jasmine and cypress trees were arranged around pools, fountains and buildings like brushstrokes in a painting.The frame for this work of art – daubed from around 1937 over the façade of his studio, then his home, gates, pergolas and the walls – was a brilliant shade of blue.

This striking, intense hue, now known as Majorelle blue, conjured up, for Jacques, the spirit of his beloved Morocco. It recalled the indigo-dyed textiles worn by the nomadic Tuareg; the glazed cobalt-blue tiles common in the south; the colour of shadows in the bright sunlight. It also, in its turn, captivated two other Frenchmen: Yves Saint Laurent and his partner Pierre Bergé, who bought the estate in 1980. (Majorelle, tragically, had been forced to sell up.) ‘We were seduced,’ Bergé wrote,‘by this oasis, where colours used by Matisse were mixed with those of nature.’

This content is created and maintained by a third party, and imported onto this page to help users provide their email addresses. You may be able to find more information about this and similar content at piano.io
Advertisement - Continue Reading Below
More From Colours
How to add colour and character to your bathroom
Created by
Ideal Standard
Studio Peake on how to update country house style
Advertisement - Continue Reading Below
Why to buy and how to apply limewash paint
6 easy ways to add drama and impact
Created for From ELLE Decoration for Created by ELLE Decoration for
DFS
Colour theory: a spectrum of decorating ideas
Diana Vreeland and her love affair with red
Elsa Schiaparelli and the power of shocking pink
How to create interiors with an individual feel
Farrow & Ball launch new paint colours
Roberto Ruspoli revives the fresco