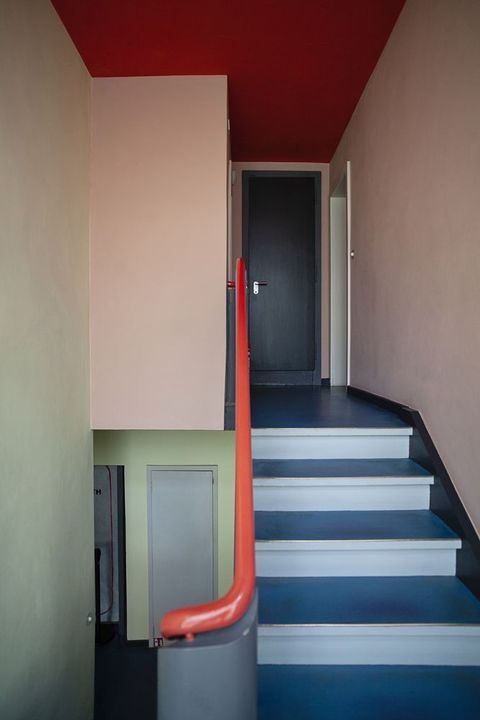 If asked to conjure up the palette of Bauhaus buildings, you could be forgiven for imagining white on white, perhaps broken up with planes of grey and hard black lines. The movement’s founder, Walter Gropius, probably didn’t help matters in this regard. He was, a friend wrote with studied understatement, ‘against the use of colours for his architecture’.

And yet the more Bauhaus interiors are studied, the more eye-popping palettes are uncovered. Master House No. 3 is a case in point. Built between 1925 and 1926, this home, along with its five near-identical neighbours on Ebertallee street in the city of Dessau, was designed with Bauhaus masters in mind. From the outside they are white and cuboid. Within, however, colour ran riot.

Despite Gropius’s personal preferences, many in the Bauhaus set loved colour. Johannes Itten, Josef Albers, Paul Klee and Wassily Kandinsky, who all taught at the school, believed they elicited emotional responses. ‘The deepest and truest secrets of colour effect are, I know, invisible to the eye,’ wrote Itten, ‘beheld by the heart alone’.

‘THE DEEPEST AND TRUEST SECRETS OF COLOUR EFFECT ARE, I KNOW, INVISIBLE TO THE EYE’

Given this milieu, both in the Bauhaus school  at large and in the houses on this artistic street,  perhaps it’s less surprising that around 40  colours were found to have been applied to  Master House No. 3’s interior. The scheme was  developed by Hinnerk Scheper, who directed the Bauhaus wall-painting workshops. He boldly mixed bright reds with earthy pinks; rich blues and copper greens; creams and greys. The palette for each room was considered individually, with a great deal of thought given to texture and placement, making the most of windows and the quality of the light. Lyonel Feininger, who moved into No. 3 in 1926 with his family, rhapsodised in letters to friends about the ‘colour and warmth’ of the house, particularly the stairwell (above), with its cobalt blue offset by the shining red line of the handrail.

The careful consideration Scheper gave to the schemes in each of the Master Houses, however, didn’t stop their inhabitants from trying out new things. Kandinsky’s home, just down the street, and that of his close friend Klee, next door, both reflected their sensual, experimental approaches. Over 200 different shades and seven separate layers of paint from this period were uncovered during some 1990s restoration work that stripped away the subsequent layers of pale plaster. Kandinsky’s living room at one point was yellow and rose, adorned with gold leaf. A vestibule was a bluish violet; the bedroom cyan. Klee, meanwhile, mixed lacquer red with mid pink, baby blue and grey.

The joyous colours of the Master Houses – and the Bauhaus in general – did not survive long. Six years after the pinks, greens and reds were daubed together on walls, the Dessau campus was shut down by the Nazis and the masters fled, taking their inventive palettes with them. The plain, pale exteriors of these celebrated houses remained, while the interiors were quickly whitewashed into conformity. bauhaus-dessau.de

This content is created and maintained by a third party, and imported onto this page to help users provide their email addresses. You may be able to find more information about this and similar content at piano.io
Advertisement - Continue Reading Below
More From Colours
How to add colour and character to your bathroom
Created by
Ideal Standard
Studio Peake on how to update country house style
Advertisement - Continue Reading Below
Why to buy and how to apply limewash paint
6 easy ways to add drama and impact
Created for From ELLE Decoration for Created by ELLE Decoration for
DFS
Colour theory: a spectrum of decorating ideas
Diana Vreeland and her love affair with red
Elsa Schiaparelli and the power of shocking pink