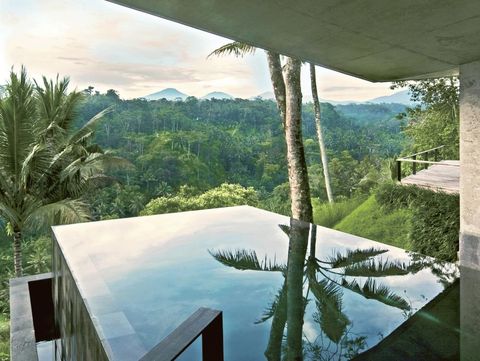 Water. We can’t get enough of it. We swim in it, drink it and bathe in it. It reflects the sky in its purity, and inspires tranquillity. A swimming pool can be designed to mirror the architecture of the house or act as a destination point elsewhere on the property.

Swimming pools have become so popular over the past 50 years that it is easy to forget that their documented origin was over 5,000 years ago. While people have been bathing since humankind’s first discovery of fresh rock pools, the Great Bath, dug some time during the third millennium BCE at the site of Mohenjo-daro in modern- day Pakistan, was most likely the first recorded swimming pool.

The Beyer residence in Malibu, designed by architect John Lautner, includes a wave-like concrete roof over the pool
Tim Street-Porter

Both the ancient Greeks and Romans are known to have built artificial pools for athletic training and health reasons. Roman enthusiasm for pools spread across the empire – they could be found from Hadrian’s Villa near Rome to the town of Pompeii, and they became a fashionable accoutrement that spread to France and Germany, as well as the famous town of Bath in England.

POOLS DO MORE THAN FUNCTION AS STAGES FOR HUMAN DRAMA. These private oases enhance life

In Asia, the Sinhalese built a pair of pools called Kuttam Pokuna in the ancient kingdom of Anuradhapura, Sri Lanka, in the fourth century BCE, while in China, the Huaqing hot springs, situated at the foot of Mount Lishan, have been in continuous use for more than 3,000 years. In Latin America, Inca palaces were built near natural geothermal ponds, and deep natural pools of water called cenotes were used for ceremonial purposes in Mexico.

In Bali, architect Cheong Yew Kuan planned this infinity pool as an abstract shape to reflect the structure of the house he built for Jan Tyniec and Christyne Forti. Extending out like a terrace, it provides uninterrupted views of the forest landscape
Tim Street-Porter

After the fall of the Roman Empire, the popularity of swimming pools waned until the 1700s, when docks were added to European rivers to help with the new fashion of public bathing in the summer. However, the real resurgence occurred when swimming became a competitive sport at the newly re-established Olympic Games in 1896. Then, possibly inspired by pools recently discovered in colonial India, swimming pools began to be built in England, and their use spread to Europe, Australia and America.

Brazilian architect Oscar Niemeyer only had one project in the United States – the Strick House. The pool he designed overlooks Santa Monica canyon
Tim Street-Porter

By the 1920s, American architects began to integrate swimming pools into their house plans. Richard Neutra’s Lovell Health House, with its innovative sprayed-concrete pool, was built in 1929, while Frank Lloyd Wright added one to his 1924 Ennis House in 1940, using the same concrete blocks as he had in the Aztec-like building.

Frank Lloyd Wright’s son, Lloyd Wright, designed the Samuel Novarro House, which includes this courtyard with a pool, in 1928. It was later restored by actress Diane Keaton
Tim Street-Porter

By the 1970s, there were more than a million pools in the United States alone – mostly in suburban backyards. It was only a matter of time before these ubiquitous symbols of suburbia came to the attention of artists and photographers. One of the most famous painters of swimming pools is British artist David Hockney, whose A Bigger Splash, created in 1967, came to define a particular moment of time in Beverly Hills. He went on to paint the inside of his own pool in around 1978, as well as a large one commissioned for Los Angeles’ Hollywood Roosevelt hotel in 1988.

Despite countless appearances in art, film and literature, pools do more than function as stages for human drama. Building one of these private oases at home can enhance life dramatically. It’s no wonder then that every element of pool design, from the plants to the architecture, remain as important as ever. Splash: The Art of the Swimming Pool is on sale now, £40 (Rizzoli New York).

This article first appeared in July 2019 issue of Elle Decoration

This content is created and maintained by a third party, and imported onto this page to help users provide their email addresses. You may be able to find more information about this and similar content at piano.io
Advertisement - Continue Reading Below
More From On Instagram
37 of the best new sustainable designs
Eco home with a poetic connection to the landscape
Advertisement - Continue Reading Below
Sebastian Cox on rewilding Britain
Li Edelkoort’s colour predictions for the decade
Open season: inspiring glass-backed extensions
ELLE Decoration collaborates with Crown Paints
Grand Hotel Quellenhof unveils its sleek redesign
Inside the new ELLE Decoration Country
Inside our festive December issue
Forte Forte opens design-led London store