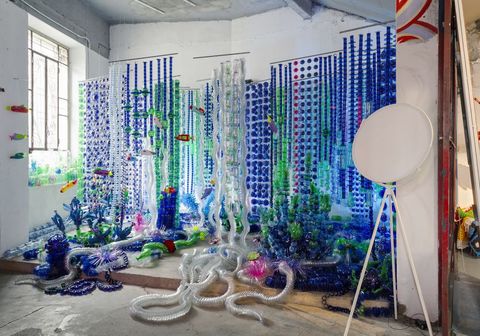 Over the past decade, the phrase ‘sustainable design’ has become an increasingly familiar refrain in our lives. To begin with, it just seemed like a really good idea; something we should all be supporting in whatever ways we can. But now the conversation is becoming urgent. The recently released Global Assessment report by respected UN research body IPBES (Intergovernmental Science-Policy Platform on Biodiversity and Ecosystem Services), which combines the findings of nearly 15,000 international studies, reveals that time is running out to save the plants, animals and insects that support human life on Earth. Unless we change our lifestyles (and quickly), some unpleasant shocks lie ahead.

This challenge was one of the main focuses at April’s Milan Design Week. Its prominence in the minds of designers served as an admission that the resources the industry consumes represent part of the problem. Gallerist Rossana Orlandi focused the spotlight on plastics, one of the most controversial materials of all – according to the Royal Statistical Society, only around nine per cent of the plastic ever produced has been recycled. As part of her ‘Guiltless Plastic’ initiative, Orlandi showcased up-and-coming names such as German designer Alexander Schul, who repurposes polystyrene to make furniture, and Spaniard Alvaro Catalán de Ocón, whose lighting is made from plastic bottles. British duo Barber & Osgerby also addressed the limits of recycling by launching the ‘On and On’ chair for Emeco.

Unlike many plastic products, which can only be reused a few times – sometimes as little as once – the duo’s chair can be repurposed indefinitely. It’s made from rPET, a new material that combines plastic bottles with fibreglass, and whose strength means that new chairs can be made from old ones. ‘Sustainable design should go beyond materiality,’ says Edward Barber. ‘Thinking about the way products are manufactured, packaged and shipped also needs be part of the solution.’

The amount of plastic in our oceans, in particular, has been making headlines of late, and, at Orlandi’s exhibition, designer Brodie Neill highlighted the issue with his ‘Capsule’ hourglass. Filled with microplastic granules collected from Tasmanian beaches, the piece critiques our throwaway culture and serves as a tribute to the environmental workers who clean up our marine landscape.

‘Designers need to be looking beyond raw materials and using waste ones, as they are now, unfortunately, in abundance,’ says Neill. ‘Waste can be redeployed with endless circularity. We have to consider the impact of materials at every stage of their existence; the methodology should be cradle-to-cradle.’

There’s a similar philosophy behind Danish brand Mater’s ‘Ocean’ collection, a reinvention of a 1955 range by Nanna and Jørgen Ditzel. Originally made of timber, it’s been reinvented using recycled fishing nets and new-generation bioplastics, which can be made from corn starch, eggs, algae or, in this case, charcoal. Other designers are seeking to reform our habits by making recycled plastic seem more precious than the virgin kind.

Brighton duo Weez & Merl make marble-esque tableware from salvaged plastic – the pieces are being used in a number of zero-waste restaurants. Dutch company Plasticiet’s recycled surfaces, meanwhile, resemble terrazzo and are crafted using all kinds of plastic, from buckets to garden furniture, while London-based designer Charlotte Kidger uses polyurethane dust, left over from industrial manufacture, to form her colourful composite tables. Normally the waste material would be incinerated or go to landfill.

Recycled fishnets are transformed into the 'Ocean' chair by Mater

Even furniture brands such as Kartell, for whom plastic is a USP, understand the need for change. It has recently debuted a sustainable version of its classic 1967 ‘Componibili’ storage unit, made of bioplastic derived from plant sources such as sugar beet and waste cooking oil. The only visible difference from the original is the updated colour palette – it now comes in four on-trend pastels.

Of course, plastics aren’t the only frontier in green design. Creative use of organic materials is just as important. Thus we’re seeing designs like Bethan Gray’s new ‘Eden’ furniture collection, created with eco-surface specialist Nature Squared, which uses by-products from the food industry, including pheasant feathers and shells, in its production. And, while many of us have grown accustomed to buying eco-friendly paints, Farrow & Ball is encouraging us to choose ethical wallpaper, too. Its new metallic patterns are made with sustainably-sourced paper and water-based pigments, and are 100 per cent recyclable.

All of these initiatives form part of a concept called the circular economy, which seeks to minimise waste and ensure as much reuse as possible. It’s being applied to every aspect of life, from fast food (McDonald’s has replaced its plastic drinking straws with a recyclable paper version) to our cultural heritage (Paris architects Studio NAB proposed replacing Notre Dame’s lead and timber roof, destroyed in April’s fire, with a vast greenhouse and beehives).

However, the circular economy won’t gain a foothold without individual sacrifice. As if to acknowledge this, Swedish tech company Doconomy’s new DO credit card – made, of course, from bio materials – tracks the carbon emissions associated with purchases, making owners aware of the impact of their consumption. They’re rewarded for ethical choices, but transactions are denied when they reach a designated carbon limit.

But will all of this be enough to save the planet? There’s a swelling chorus of voices that say no. In fact, they argue, we just need to stop using problematic materials in the first place. ‘There’s so much reliance on this magic phenomenon of recycling but, frankly, I think it’s just an excuse to consume more,’ says Ross Lovegrove, whose new ‘Ergo’ collection for Natuzzi is made from sustainable woods and natural latex. ‘It’s better to consume less from the outset – organic materials make sense because of their intrinsic health benefits. In my own home, I live predominantly with beautifully crafted secondhand furniture, pieces made during times when things were more valued.’

Dutch designer Marcel Wanders takes a similar view. ‘Recycling ultimately legitimates consumption,’ he says. ‘Let’s not recycle what we can reuse.’ To make this point, Wanders’ contribution to Orlandi’s ‘Guiltless Plastics’ exhibition was a disposable PET plastic bottle (gifted to him by its designer, Ross Lovegrove), which he’d marked each time he’d used it – 200 times – and daubed with the word ‘REUSE’ in red. ‘As well as a materials problem, we have a psychological problem,’ he adds. ‘Most of the products that go to trash aren’t broken; people are just bored with them. Making things loved is a fantastic ecological step.’

We can all play our part by buying vintage and locally made products, and by seeking out the growing number of stores specialising in sustainable homewares – Wearth London, Home of Juniper and Urban Collective are some of the best. ‘Buying things that last is the best and easiest thing you can do for the environment,’ adds Tara Button, founder of eco website BuyMeOnce.com. She’s campaigning for products to be awarded a ‘longevity mark’. The notion flies in the face of global capitalism, which functions by making us constantly crave new things. Breaking that cycle is set to be design’s biggest challenge yet.

This content is created and maintained by a third party, and imported onto this page to help users provide their email addresses. You may be able to find more information about this and similar content at piano.io
Advertisement - Continue Reading Below
More From On Instagram
29 of the best new sustainable designs
Eco home with a poetic connection to the landscape
Advertisement - Continue Reading Below
Sebastian Cox on rewilding Britain
Li Edelkoort’s colour predictions for the decade
Open season: inspiring glass-backed extensions
ELLE Decoration collaborates with Crown Paints
Grand Hotel Quellenhof unveils its sleek redesign
Inside the new ELLE Decoration Country
Inside our festive December issue
Forte Forte opens design-led London store