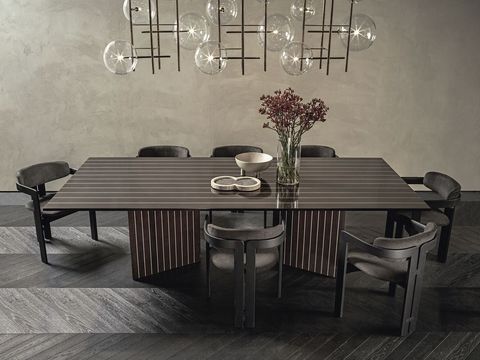 When Pierangelo Gallotti and Luigi Radice joined forces in 1955 to form their own design company, the duo shared a vision of fine craftsmanship and experimentation with materials. Originally known for decorative objects and one-off pieces of handmade furniture, Gallotti & Radice would evolve to become the first company in Italy to create furniture made entirely from crystal glass.

Glass has always been at the heart of the business and, over the years, Gallotti & Radice has pioneered new techniques and finishes, such as painting and layering the clear surface
with a very fine coating of goatskin parchment, as well as designing pieces that blend glass with other materials, from marble to brass and wood. The ‘Adam’ table, created by Luigi Massoni in 1971, was the company’s first piece formed entirely from glass. Massoni later went on to help the two friends plan their glass-based headquarters in Brianza, the furniture, manufacturing heart of Italy, not far from Milan.

Other seminal pieces from those early days that helped define the company’s aesthetic of strong silhouettes and minimal detail include the chrome-framed ‘SirT 32’ coffee table (below) and two-tiered circular ‘Riki’ trolley. Both designed by Gallotti in 1971, these bona fide modern classics remain part of the collection today.

In 1996, after 40 years in business, the duo passed the baton to their children – Silvia and Massimo Gallotti and Marco Radice – and with the new generation came a shift towards a total lifestyle concept. Reassuringly, though, the company’s design approach remains unchanged, as Gallotti & Radice continues to work locally with the finest artisans to ensure traditional skills are supported.

Collaborating with external designers is also an integral part of Gallotti & Radice’s DNA, and is a practice the second generation has continued to successfully embrace. Pinuccio Borgonovo designed ‘Air’, the company’s office system collection that launched in 2008 and remains a best seller today, while the ‘Changes’ modular mirror system (2009) by Patricia Urquiola was so popular it was developed into a full lifestyle collection in 2014. It now includes sofas, side tables, shelving and lighting, with many of the additions designed by Massimo Castagna.

This year, a contemporary take on traditional marquetry has been a new focus for the brand, taking the form of the ‘Duale’ walnut wardrobe by Pietro Russo. There’s also a debut piece from collaborators david/nicolas: the ‘Prism’ table (above), which features Indian rosewood inlaid with thin strips of aluminium. The ‘Sophie’ sofa by Federica Biasi (above), meanwhile, speaks to this season’s trend for curvaceous furniture, with a belt-like metal frame pinching its ample form. How fitting that, as the brand approaches its 65th anniversary, the founding principles of promoting artisanal skills and combining contrasting materials are still present.

2. Most of the brand’s products are made from recyclable glass, steel and aluminium. In 2010 the company built a photovoltaic panel system, which was installed at its headquarters in Cermenate. It produces 86,500 KWh of clean energy per year.

3. In 2018, it added its first bedroom collection, including the ‘Xeni’ bed by Massimo Castagna.

4. The company plans to open The Museum of Glass. ‘We want to create a place to treasure our history and honour our design traditions,’ says Silvia Gallotti. ‘It’s a place to educate and inspire the craftspeople of tomorrow.’ gallottiradice.it

This content is created and maintained by a third party, and imported onto this page to help users provide their email addresses. You may be able to find more information about this and similar content at piano.io
Advertisement - Continue Reading Below
More From Design
Design Hero: Bodil Kjaer
Tom Dixon’s bold new bathroom collection for VitrA
Advertisement - Continue Reading Below
Meet tomorrow’s big names of British design
Quick homeware buys sure to raise a smile
Spanish architect Ricardo Bofill dies aged 82
Why the ‘Mah Jong’ sofa is an icon of 70s design
What are the big design trends for 2022?
Meet the muse for Ginori 1735’s new collection
Treasured: Henry Holland on his favourite object
ELLE Decoration International Design Awards 2021