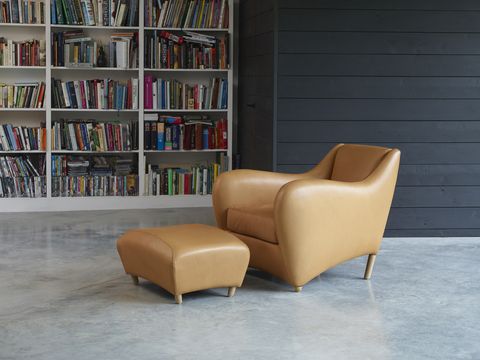 To design an armchair that sits as easily in an industrial warehouse loft as it does in Concorde’s glamorous lounge is no mean feat.

But it seems that the creation of the ‘Balzac’ chair was more effortless than you might expect.

Designed in 1991 by then emerging talent Matthew Hilton for SCP, itself a newly established furniture firm in London’s burgeoning Shoreditch, it’s become an instantly recognisable piece of British design.

‘We were presenting an alternative to the Italian design scene, which was a bit staid at the time’

‘We were part of a bunch of designer-makers – Ron Arad, Tom Dixon – who were presenting an alternative to the Italian design scene, which was a bit staid at the time. I’m sure most Italian companies would have spent ages developing the “Balzac” – we just did it,’ notes SCP founder Sheridan Coakley.

‘There were lots of things about it that weren’t fashionable then,’ says Hilton of the chair. ‘It came from an old typology and it was covered in leather that aged quickly when everyone was covering seating in thick, brightly coloured felt.’

Designer Matthew Hilton working on the ‘Balzac’ prototype in 1991
SCP

As the first piece of upholstery for both retailer and designer, the brief was loose, the only caveat being comfort.

‘Back then, design was more important than function, but we went out of our way to make a comfortable chair – we wanted to make the kind of thing you see in an old gentleman’s club where someone’s asleep in the corner,’ reminisces Coakley, who met Hilton shortly after his showroom opened in 1985.

‘Terence Conran always said it was his favourite chair’

But its voluptuous form and louche attitude wasn’t an instant success: ‘Interestingly, it did take us two years to sell one.’ It wasn’t until Terence Conran spotted it and stocked it at The Conran Shop that it started to take off (‘Terence Conran always said it was his favourite chair,’ adds Coakley).

The poster piece for 90s ‘Cool Britannia’,‘Balzac’ embodied the zeitgeist, making it into the Museum of the Home’s permanent collection, countless magazine pages, adverts and books and even Tony Blair’s office at the 1997 Anglo-French summit in Canary Wharf. But the chair’s popularity has endured well beyond its debut decade.

As testament to this, SCP does a brisk trade in reupholstering original pieces and there’s a healthy secondhand market for them, too; ‘We’re now covering chairs that were bought in the 90s, so the longevity is there in the design. It’s a pretty circular product.’

Now more than ever, as SCP has recently developed a way for its shapely silhouette to be made using only natural, sustainable materials; the original foam padding has now been substituted for a combination of latex, coconut fibre and recycled wool felt. This year sees new upholstery fabrics added to the range, too.

An early version of the Balzac armchair on show at SCP Curtain Road in 1991. Featuring Sheridan’s daughter and a friend
SCP

Hilton says it’s tricky to know exactly what has made the ‘Balzac’ such a long-standing success – ‘you can’t set out to design a classic, it just happens’ – but its ergonomic, inviting shape and tactile quality seem to have something to do with it. ‘I love it when I see it in people’s homes. We get lots of people saying ‘we’ve had this for 20 years and it’s covered in dog hair and ice cream but it’s our favourite chair’, which is the best thing,’ says Hilton.

As Coakley puts it: ‘It’s consumers that decide whether something’s going to turn into an icon. I think we can unashamedly say it is because of that.’ scp.co.uk

This content is created and maintained by a third party, and imported onto this page to help users provide their email addresses. You may be able to find more information about this and similar content at piano.io
Advertisement - Continue Reading Below
More From British Design
Why is stylish stationery such an enduring joy?
15 British interior designers to know right now
Advertisement - Continue Reading Below
Richard Brendon on his new collection with the V&A
ELLE Decoration British Design Award winners 2021
Introducing L.Ercolani, Ercol’s new sister brand
Name to know: British designer Fred Rigby
Henry Holland on his new ceramics collection
Mother of Pearl’s first sustainable homeware range
The best bespoke furniture makers in the UK
Urban Splash: property developer with a difference