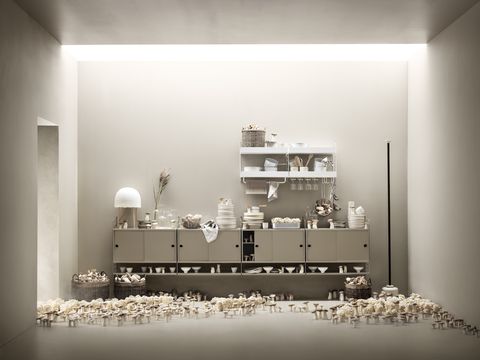 When it comes to Scandinavian design, there’s often a big misconception – “minimalism.” Although there are parallels, such as the focus on function, clean lines and light colors, Scandinavian design is so much more than just neat and necessary. Equally essential as pure function is beauty, a beauty that draws inspiration from Nordic nature. To quote the press release for the Brooklyn Museum’s 1954 “Design in Scandinavia” exhibition: “A feeling of quiet, good elegance pervades the entire exhibition area on the first floor where bright lights dance about on silver, glass, porcelain and handsome woods in forms and patterns of great variety.”

Scandinavian design – a defining style, both then and now

The exhibition, which toured the USA and Canada for three and a half years following its Brooklyn debut, marked the coining of “Scandinavian design” as a term. More than 700 exhibits of design from all over Sweden, Denmark, Norway, and Finland together in one place. The style’s distinguishing characteristics, which endure to this day, were summarized in the exhibition’s accompanying brochure – a desire to “create surroundings which satisfy the needs of modern man and simply and naturally fulfill practical and esthetic requirements”.

Scandinavian designers laid the foundations for our contemporary notions of modern beauty, particularly in terms of furniture design, with subtle, functional shapes in clean lines and light colors. Ever inspired by Nordic nature, its frigid winters translated into warmth, copious light, and open spaces – all primal human needs, arguably one reason why so many Scandinavian design classics are still produced today, as popular as ever. One of these iconic pieces is the String shelving system, first conceived in 1949.

“Form follows function.” With these three words, Chicago-based architect Louis Sullivan (1854-1924) influenced countless other architects and designers in the 19th and 20th centuries, inspiring the German Bauhaus school as well as Scandinavian design in the mid-20th century. The latter included Nisse and Kajsa Strinning, who designed the famous String shelving system.

The shelving system was the result of a clever marketing idea from the Bonnier publishing house, which launched a competition in 1949 to design the best bookshelf, which would then be produced. The requirements were that the shelf should be affordable, lightweight, and easy to assemble. Nisse Strinning had always had an eye for what people needed, even if they didn’t know it themselves – and his wife Kajsa had already long had the seed of the String shelf in mind. In the end, the design that she submitted for the competition had another decisive advantage: the shelf, whose basic structure consisted of two ladder frames and some wooden planks, could be individually adjusted and assembled. Today, a standard feature; at the time, a revelation. As Bonnier eventually advertised: “A bookshelf that grows with your collection.”

From the initial String shelf, the Strinnings soon developed an entire range with different functional elements and accessories, which can still be found in any room, home, or office to this day. In 1952, the UN ordered String shelving for their headquarters in New York; in the 1960s, it was the bestselling Scandinavian furniture in Germany; and since 1979, the String shelving system has been part of the Swedish National Museum’s permanent collection.

The String shelving system’s classic design endures to this day, more than 70 years after the first model. In 2004, Peter Erlandsson and Pär Josefsson set out to breathe new life into the brand. Not only did they have the Strinnings’ blessing to do this – Nisse himself conceived the “String Pocket,” a smaller version of the wall model, specifically for the occasion. This would be his last design before his death in 2006.

Today, the brand is continuously inviting different designers and architects to bring their own interpretation to String shelving. Available in a variety of colors and materials, the one thing that never changes in this constant reinvention are the dimensions. In this way, new elements can always be combined with older models. It’s pleasing to think that String shelves can be passed down from generation to generation and still keep evolving in the process. A timeless, esthetic, and functionally ground-breaking design, today as much as ever – that’s what makes a pioneer. Thousands of possibilities for the future and more.

String shelving in the bathroom
String furniture
This content is created and maintained by a third party, and imported onto this page to help users provide their email addresses. You may be able to find more information about this and similar content at piano.io
Advertisement - Continue Reading Below
More From Design
Former Gucci designer Gergei Erdei's new homeware
9 things to see and do at Clerkenwell Design Week
Advertisement - Continue Reading Below
14 of the best outdoor armchairs for summer 2022
19 of the best planters for outdoors and in
Martha Freud’s tableware collection for 1882 Ltd
How to build a beach house by RX Architects
Roksanda Ilinčić’s most treasured object
The best decorative plates for the table or wall
15 sustainable kitchenware buys
Retreats taking ‘out of office’ to the next level