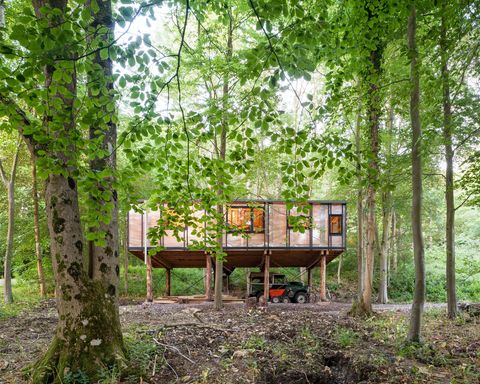 It’s a challenge to find anything in common between Piers Taylor and the stereotypical image of the architect who spends hours slaving away at the drawing board, poring over every detail. For Taylor, architecture is not about artistry or craft, but learning by doing.

This is a man who loves to see a bodged joint, because it shows someone who feels free to explore an idea rather than being restricted by the pursuit of perfection. ‘I’ve always been suspicious of people who prioritise making something perfectly, because it’s like saying that technique is more important than anything else,’ he says.

That’s not to say that Taylor’s buildings aren’t well made. You only have to look at the hewn slate and board-marked concrete of the House with Courtyards in Polzeath, Cornwall, or the gently curved copper-shingle-clad roof of the new ‘Beezantium’ at Somerset’s The Newt hotel to be convinced of his aptitude for material craft. It’s just that resourcefulness and experimentation are qualities he values more highly.

Taylor never set out to become an architect. He had always loved buildings and had a talent for making, but wasn’t academic, and it was only when he moved to Australia and enrolled at Sydney College of the Arts that he found his direction. After attending a lecture by Glenn Murcutt– the architect and Pritzker Prize winner acclaimed for his modest, environmentally sensitive buildings – Taylor was so inspired that he immediately switched to the architecture programme.

But back in the UK, he struggled to find the same appreciation for environment that he had learned from Murcutt, neither through studies at the Architectural Association in London nor while working at architectural practices in Bath.

‘Moonshine’ house in Bath, a former schoolhouse built in 1786, was retrofitted by Piers Taylor in 2020
Jim Stephenson

The shift came in 2008 when, invigorated by a second spell in Sydney, Taylor decided to design and build his own home on the outskirts of Bath. Called Moonshine, it involved renovating and extending an 18th-century schoolhouse to create a contemporary retreat that could generate all of its own electricity. There was no grand plan – just locally sourced materials and simple construction techniques, easy enough to be carried out by amateurs.

‘I didn’t have any confidence that I knew what I was doing, although instinctively I knew that I wanted to work in a very particular way,’ says the architect. ‘I didn’t just want to do pretty buildings in landscape.’ Shortly after, Taylor built a workspace nearby and setup his own practice, Invisible Studio, with the ambition to continue designing in the same fashion.

This hands-on approach has come to define everything that Taylor has done since, from helping ordinary people embark on self-builds for BBC series The House That £100k Built to working with architecture students to create experimental structures through the Studio in the Woods workshop programme.

The interior of the Beezantium at The Newt hotel
Jim Stephenson

That same thread runs through his latest projects. The design for the East Quay cultural centre in Watchet has its roots in the area’s ad-hoc harbour structures, while a new residence in Hampshire finds beauty in a humble timber truss roof. He also recently revamped Moonshine, making the building more environmentally friendly by adding black corrugated steel cladding, extra insulation and improved levels of airtightness.

No matter the scale of the task, Taylor’s ethos is always to work with the materials and techniques that are close at hand. Rather than employing a team, he simply collaborates with others who share his mindset. The long-term goal is to empower more people to get involved in the process of making buildings, regardless of their skills. ‘I really like it when buildings we design become part of a process of change and upskilling,’ he explains.

‘I trust that, as architects, we can choreograph that process rather than controlling it.’ It is perhaps why his buildings share a sense of creative freedom.‘DIY culture is about using whatever is around you to take control and transform your life,’ he says. ‘It’s so freeing to make something yourself and live with the consequences.’ invisiblestudio.org

Related Stories
25 of the top architects in the UK for any project
Join the rebellion changing rural architecture
9 of the best architecture and design podcasts
This content is created and maintained by a third party, and imported onto this page to help users provide their email addresses. You may be able to find more information about this and similar content at piano.io
Advertisement - Continue Reading Below
More From Design
Former Gucci designer Gergei Erdei's new homeware
9 things to see and do at Clerkenwell Design Week
Advertisement - Continue Reading Below
14 of the best outdoor armchairs for summer 2022
This new design showroom is a must-visit
Created by
Design Centre, Chelsea Harbour
19 of the best planters for outdoors and in
Martha Freud’s tableware collection for 1882 Ltd
How to build a beach house by RX Architects
Roksanda Ilinčić’s most treasured object
The best decorative plates for the table or wall
15 sustainable kitchenware buys