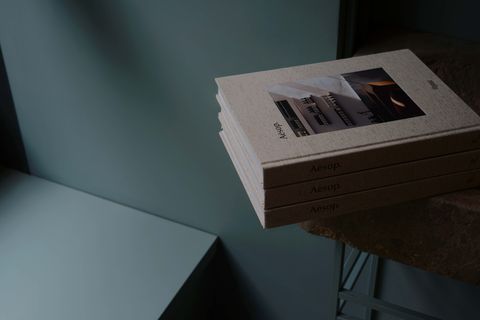 Each of beauty brand Aesop’s stores tells a different design story and now the 33-year-old brand has put many of those tales into a new 336-page tome, co-authored by founder Dennis Paphitis. Described as ‘part photo essay, part vignette, and part tribute’ it's packed with evocative photography by Yutaka Yamamoto and charts the history of this much-admired, influential brand and includes contributions from the architects and artists who have worked with Aesop.

‘We wanted to tell something of our story in our thirty-third year. Pause and reflection matter,’ says Paphitis. The writing process, he reflects, was ‘raw – particularly in relation to what we omit, what we retain, what we choose to celebrate. The book is not intended as a detailed overview, but a selection of some of the stories and people who have contributed to Aesop.’

Not many brands have become as successful as Aesop without also becoming ubiquitous. That the Australian company has retained its allure is largely down to one thing: its singular approach to store design of which there are now 230 in 22 countries. Where others reproduce the same template over and over again, every Aesop store is different. Though the name is a familiar presence on London’s high streets – it’s just opened its 20th UK branch, designed by Luca Guadagnino Studio in the Piccadilly Arcade – it is never a predictable one. This approach is beautifully laid out in a chapter in the book called ‘On Planting Neighbourhood’ which covers nine different stores in detail, including Aesop Aoyama in Tokyo, Aesop Chelsea in New York, Aesop Stockbridge in Edinburgh, Aesop San Lorenzo in Rome, and Aesop Lamb’s Conduit Street in London.

Aesop’s approach was unconventional from the start. The first stand-alone store, opened in 2003 in St Kilda, Melbourne, was housed in a tunnel-like ramp leading to an underground car park. Later openings were similarly experimental: the ceiling of the Adelaide boutique, for instance, was decorated with over 7,000 amber glass bottles – the same material used for its products – while the Nolita outpost was constructed using old copies of The New York Times, the edges of their densely packed pages forming a textural wall relief. ‘We have always acknowledged the effect good design has on our lives, and endeavour to bring something worthwhile to every space,’ says creative director Marsha Meredith. ‘Our stores are a physical manifestation of our values.’

That doesn’t just mean being inventive with newspapers and glass bottles. Many stores, such as the one overseen by interior designer Ilse Crawford in Mayfair in 2008, take their cue from homes in an effort to make people feel at ease. Restful jade green walls, parquet floors and an open fireplace featured in Crawford’s design, as well as a huge reclaimed circular washbasin for customers to try products (all Aesop stores feature luxurious sinks).

In the Edinburgh store, created by Aesop’s in-house design team, you’ll find an organic palette of rough-hewn limestone, sycamore and reclaimed pine that could inspire a modern-rustic bathroom or kitchen. Details such as the emerald green Moroccan tiles in the Covent Garden store, the blue-grey walls and Persian rugs in the Richmond boutique and the red brick and copper sinks in the Ginza, Tokyo branch all offer inspiration for real-life homes. ‘Various aspects of our designs speak to domestic spaces – not just materials and running water, but also plants, furniture and decorative items,’ says Meredith. Such is the variety of elements involved that Aesop has an entire website dedicated to cataloguing its retail projects – taxonomyofdesign.com.

Creating this unique portfolio means working with a wide range of international talents, from Japanese architect Jo Nagasaka, who worked on the Ginza concept, to French studio Ciguë, who masterminded the Covent Garden store. ‘We devote considerable time to developing relationships with designers across the world,’ says Meredith. ‘Each project is a journey of discovery and the experience we seek to create is one of quiet repose.’ Here’s to many more years of that.

‘Aesop’ (£57, published by Rizzoli New York) is available for purchase in signature stores and online, aesop.com

This content is created and maintained by a third party, and imported onto this page to help users provide their email addresses. You may be able to find more information about this and similar content at piano.io
Advertisement - Continue Reading Below
More From Lifestyle & Culture
Expert tips for reducing food waste at home
Lyn Harris on her new fragrance collaboration
Advertisement - Continue Reading Below
How Skye became a destination for design lovers
Personalise your table with these creative ideas
My Cultural Life: author and TV judge Simon Doonan
How to stimulate the 5 senses this festive season
Mixologist-approved mulled wine recipe
How to create a festive mood with minimum fuss
Our guide to the best homeware gifts under £100
The expert guide to stylish gift wrapping