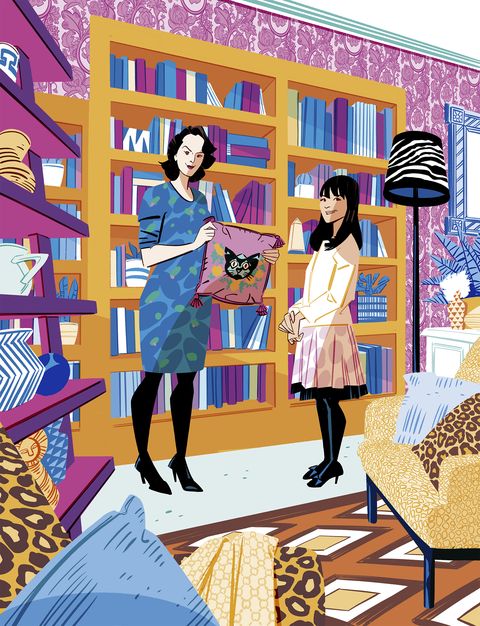 March, according to tradition, is the time for spring cleaning. Only we no longer refer to this in such anachronistic terms – we call it ‘decluttering’, ‘purging’, a ‘domestic detox’. One woman of my acquaintance – whom, I confess, I don’t much like – even terms this process a ‘chaos colonic’, relishing the way it renders the rest of us a bit green. For ridding one’s home of extraneous possessions has acquired a spiritual aspect, in which the shedding of material goods is deemed a mode of self-actualisation, and minimalism the only form of godliness we will allow.

Our decluttering hysteria lurched into being around 2014 with the publication of Marie Kondo’s The Life-Changing Magic of Tidying. Selling millions of copies in over 30 countries, Kondo’s manual gained her a place on Time Magazine’s list of the 100 Most Influential People in the World in 2015. Where Ikea’s 1996 advertising campaign had urged Brits to ‘Chuck out their chintz’, so Kondo encouraged us to chuck out almost everything, reducing their stash to stuff that ‘sparked joy’.

It is here that I must disclose an interest: mine was the first (and possibly last) British home Kondo visited in order to work her magic. I liked her a lot, notwithstanding her being so doll-like that when we were photographed together I resembled a giant. Despite the fact the aesthetic of the miniscule rented hovel I then inhabited could be summarised as ‘excess all areas’, she informed me I had a ‘beautiful lifestyle’, that I clearly loved all the things that surrounded me, and that my tidying technique was ‘quite advanced’. I preened, while bracing myself against my 1,200 books and nine crates of make-up to prevent our tiny heroine being flattened.

Even if I myself didn’t quite embark upon the ‘cleaning festival’ that Kondo advocated, Kondo-mania gripped the rest of the nation as it did the world at large. Acolytes reported a ‘discarding high’, having to restrain themselves from lobbing out spouse and offspring. Meanwhile, charity shops reported a ‘Kondo effect’, reaching its apotheosis after her Netflix series launched in January 2019.

The new domestic asceticism felt like a reaction against the bling of the early 2000s, a post-recessionary puritanism to atone for pre-recessionary excess. However, this sanitised state of being was no less a signifier of stealth wealth – a bleach-white life that spoke of white privilege. Its most extreme proponents were Silicon Valley techno-geeks – men who could have it all and therefore wanted nothing. Albeit that, as critics have observed, theirs was a kind of decadent austerity, requiring consummate social capital to create it, complete with lesser earners to do the grunt work.

Still, one era’s style edict is another’s gross platitude. At the start of a new decade in which we are facing the fallout from Brexit, Trumpery and planetary crisis, the new minimalism is starting to look – well, old. In a world this bleak, what we crave is cheer, not self-abnegation; comfort blankets, not exorbitant hair shirts. I’m not talking hygge – frankly, there’s only so much knitwear a sofa can take. However, happiness is not to be found in bleached wood and greige walls. As ornamentation king Jonathan Adler has remarked: ‘Minimalism is a bummer’. Even millennials, famed privilegers of experience over possessions, still require the odd succulent to foster self-care.

Why, even Kondo herself is post-Kondo. In the mother of all volte-faces, she’s taken to selling stuff – yes, stuff! – in a shop. As of last November, the decluttering guru has been flogging a $275 brass tool holder, $52 tea scoop, and $24 crumb brush in her online store, with a $12 pointy stick the object of particular mirth.

The increasing cross-pollination between fashion and interiors has seen ultra-maximalists such as Gucci’s Alessandro Michele (who once considered quitting the catwalks for interior design) joining stalwarts such as Missoni, Dolce & Gabbana and Versace in bringing lavish exoticism to our homes. Meanwhile, House of Hackney’s design consultant Steve Corcoran can cook you up a snakeskin, leopard print and bamboo extravaganza, as he recently did for Kate Moss’s spare room – a visual storm with its crisp, white bedsheets the only low-key aspect.

Colour – and, yes, even clutter – looks great on Instagram. A porridgey void? Not so much. Pained asceticism feels increasingly naff and hotel-like, creative cacophony a rebellion against conformity in which individualism rules. However, as the child of hoarders whose home took two and a half years to empty after they died, I could never be a proponent of unmitigated chaos. Stuffocation author James Wallman is right: we do need to live more with less, as much to save our souls as to save the planet.

Nevertheless, sans stuff, I am nothing. The challenge here is to achieve a balance between minimalism and maximalism – minimalesque? maximalish? – a space that allows us room not merely to exist, but to flourish.

This content is created and maintained by a third party, and imported onto this page to help users provide their email addresses. You may be able to find more information about this and similar content at piano.io
Advertisement - Continue Reading Below
More From Decorating
Decorator Index: Pamela Shamshiri
William Morris and a love of all things green
Advertisement - Continue Reading Below
10 timeless colour schemes from the FENIX range
Created by
FENIX
Nathalie Du Pasquier wants you to rethink tiles
Holloway Li's sustainable approach to interiors
Oliver Gustav’s minimalist Christmas style
Diana Vreeland and her love affair with red
15 creative Christmas decorating ideas
How to light your home – tips from the experts
Lucienne Day's love of uplifting mustard yellow