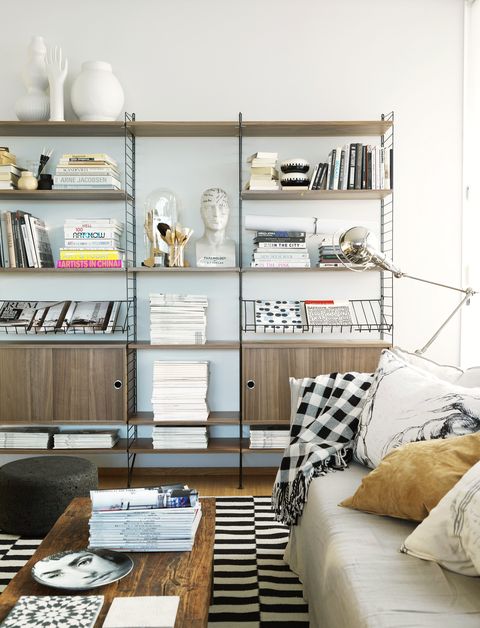 Scandinavian design might be missing an icon had a Swedish publisher not hatched a plan to get its customers to buy more books in 1949. Bonnier’s call to design an affordable bookshelf attracted 194 entries, but none was quite so neat as the solution proffered by a pair of architecture students named Nisse and Kajsa Strinning.

The winning product had to be flexible, stylish and easy to ship – something a young couple would continue to fill with Bonnier’s books for years to come. Their ‘String’ concept had it all in spades.

The distinctive ladder framework echoed an earlier innovation by Nisse, who had used the same plastic-coated wire to fashion a dish rack for Swedish brand Elfa. A simple starter pack of two side panels and three wood veneer shelves presented the public with a structure straight out of the box, which could be slotted together to suit the heights of their books. The concept is now a staple of flat-pack furniture. Back then, it was a revelation.

Modularity proved String’s master stroke: though rooted in domesticity, its capacity for near-endless configuration saw architects scale up orders for offices and libraries.

As sales of the shelves skyrocketed – first in Sweden, then beyond – Nisse never wavered from his strictly minimalist principles: a free-standing shelf developed in the 1950s was discontinued when he deemed the wire criss-cross backing required for stability one deviation too far.

As family life shifted, so did style, prompting production of String to cease in 1974. When Swedish entrepreneurs Peter Erlandsson and Pär Josefsson revived the brand with the Strinnings’ blessing in 2004, customers’ imaginations became a catalyst for innovation. Discovering the shelves were routinely repurposed as shoe racks, they honed in on the hallway, developing a metal design with perforations for all manner of hangers and hooks.

Though original String shelves were by that time a cult buy, the plastic-coated wire was prone to peeling, so the manufacturing process went under the microscope. The compact ‘Pocket’ design, triumphantly launched in 2005, proved Nisse’s final gift; he passed away the following year.

Architects and designers Anna von Schewen, Björn Dahlström and Mats Theselius have all since contributed to the String family, while fresh colours – like this year’s new ‘Sage Green’ – convert generations of new fans.

It’s not the only mid-century modular shelving to spark fervour among design lovers, but all owe much to this once radical idea. Now, there are String solutions for everything from work stations to wine glasses. stringfurniture.com

Adverts from publisher Bonnier focused on the flexibility of its competition-winning design, dubbing the String system ‘a bookshelf that grows with your collection’.

A prestigious commission in 1952 connected what are now two icons of modernist design, when the shelves were ordered to outfit the newly built UN headquarters in New York City.

This decade of success also saw String awarded the gold medal at the Milan Triennale in 1954 and featured alongside Finn Juhl, Arne Jacobsen and Alvar Aalto at the H55 world fair in Helsingborg the following year. The event is now recognised as a crucial juncture in Sweden’s functional design movement.

BREAKOUT MOMENTS | The original design became a cult classic, setting the stage for a 21st-century comeback

A series of imposters saw the String system patented in 1961. Throughout the 1960s, it dominated the European shelving market and remained the best-selling Scandinavian furniture in Germany.

As Erlandsson and Josefsson kick-started production once more in 2004, Nisse Strinning designed a diminutive edition, the String ‘Pocket’, which launched at Malmö’s Form/Design Center in a zesty, neon hue.

WHY IT’S NOW | 70 years on, the String system has lost none of its shine

String’s second coming only strengthened its sustainable, local outlook. Made entirely in Sweden from oak, walnut and ash veneer, the brand’s practices are guided by pillars of quality, environment and social responsibility.

Under the protective but boundary-pushing watch of Erlandsson and Josefsson, this design icon has broken free of the living room, and its original guise as a simple bookshelf, to rightly claim space in every room of the house.

This content is created and maintained by a third party, and imported onto this page to help users provide their email addresses. You may be able to find more information about this and similar content at piano.io
Advertisement - Continue Reading Below
More From Design
Treasured: Tricia Guild on her prized possession
Design hero: Italian maestro Gianfranco Frattini
Advertisement - Continue Reading Below
How restaurant merch went luxury - and what to buy
Thomas Heatherwick‘s green vision of the future
New home technology
Best new storage designs to de-clutter your home
Design Heroes: Carl Auböck II & III
Pantechnicon: the best of Nordic/Japanese design
Buy retro IKEA designs at the 'Billy' archive sale
The best bespoke furniture makers in the UK