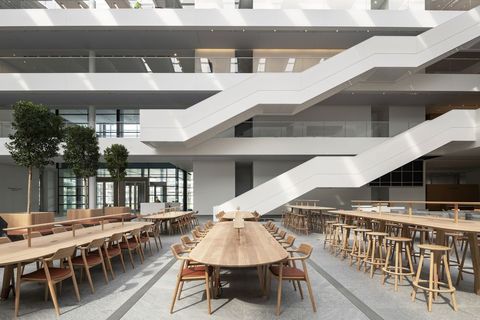 Having set up his own small carpentry studio as a teenager before attending the Parnham College of Furniture Makers, Benchmark’s co-founder Sean Sutcliffe was destined to be a craftsman. It was at college that he met his future business partner, Sir Terence Conran, who was visiting. Sutcliffe accepted Conran’s invitation to work for him, and he began with prototyping and designing solid wood furniture for Heal’s, Habitat and The Conran Shop.

What began as designing and producing furniture for retailers evolved into creating bespoke pieces for Conran’s restaurant projects, and then for others. From there, larger commissions were won: custom furniture for The London Library, the Ashmolean Museum in Oxford, Case Western Reserve University in Ohio (pictured above), Cornwall’s The Eden Project, plus a vast list of hotels including Rosewood and The Berkeley in London and other leading retailers such as Alex Eagle – The Store and Paul Smith.

At the heart of the business is craft and making – something Sutcliffe and his team, which includes six in-house designers, have never strayed far from. ‘There’s a lot of crossover between domestic and commercial,’ says Sutcliffe, ‘particularly as workplace furniture gets softer and softer.’

Of note, there’s the ‘Ovo’ collection of tables, storage and seating designed by Foster + Partners, which won this year’s furniture category at the ELLE Decoration British Design Awards. The minimalist ‘Muse’ sofa by Space Copenhagen launched during Clerkenwell Design Week, and just out is the ‘Sage’ collection designed by New York architect David Rockwell, which includes a sit-stand desk and a sofa made from solid wood and upholstered with entirely natural materials.

‘I have this firm belief that wood is good for us,’ concludes Sutcliffe. ‘It’s said that timber lowers your heart rate. From a wellness point of view – biophilic design – it really resonates. I’m really keen to bring more and more solid wood into people’s lives.’

1 When Benchmark launched in 1984, with a one-off £6,000 investment fromTerence Conran, there were just three members of staff. Today there are 70.

2 ‘I had a rebellious feeling and wanted to make a point of difference by creating a sustainable business. We have never worked with tropical timbers and only use sustainable wood,’ explains Sutcliffe.

3 Benchmark has a highly successful and award-winning apprenticeship programme– of the 60 apprentices who have passed through Benchmark, around 40 are still employed by the company.

4 The brand was commissioned by Leicester Cathedral to make a new cathedra and cross (above) for the Bishop. The contemporary designs by Draisci Studio were complex to build, with detailed geometry and faceted panels in walnut. benchmarkfurniture.com

This content is created and maintained by a third party, and imported onto this page to help users provide their email addresses. You may be able to find more information about this and similar content at piano.io
Advertisement - Continue Reading Below
More From Design
Design Hero: playful polymath Enzo Mari
Ask an architect: Phil Coffey
Advertisement - Continue Reading Below
The Minotti story: family, furniture and finesse
Inside Obsidian virtual concept house
Daniel Schofield on his favourite possession
The future home: living in the post-pandemic age
Stylish accessories for design-savvy dogs and cats
Trend expert Li Edelkoort’s new watch for Rado
Treasured: Tricia Guild on her prized possession
Design hero: Italian maestro Gianfranco Frattini