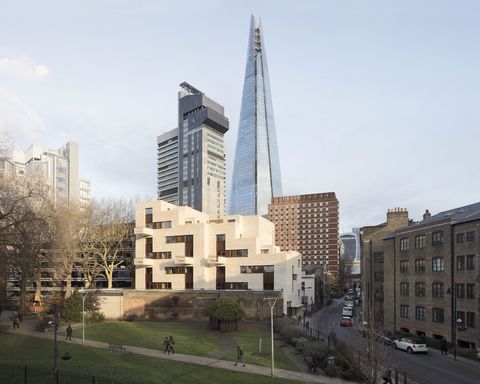 In the UK, we have become particularly adept at barricading ourselves within our isolated four walls, behind domestic clichés that prioritise the individual over the communal; a nation of lawn-mowers and curtain-twitchers, Englishmen in their castles.

Yet just over the North Sea, things are different. In Denmark, the Netherlands, Germany, Switzerland and beyond, there are many more examples of communal domestic structures, housing multiple families and other social units with shared facilities and communal resources alongside more private dwelling spaces. In Denmark, for example, there were an estimated 700 co-housing communities in 2010, and in Berlin alone there exists more than 500 equivalent baugruppen, or building group, projects. Meanwhile, in the UK, there are fewer than 20 co-housing communities.

The reasons for this are complex. A combination of social habits, restrictive planning legislation and a construction industry dominated by a few big house builders means there has been little room for experimentation in the realm of the domestic. Yet things may be changing. A handful of developers are responding to the tripartite crises of affordability, quality and variety in UK housing, with new homes prioritising community, flexibility and our changing social make-up.

WIGGLE ROOMS
81-87 Weston Street in Southwark (see top) is home to a multi-residence block designed for flexibility. Each of the buildings’ interlocking flats, conceived by AHMM architects, are designed over split levels on either side of a double-height space, with a central void creating a lofty space for flexible living. ‘Our apartments are designed around the home’s three levels of social space: eat, live and work,’ explains Roger Zogolovitch, founder and creative director of developer Solidspace, which works on high-end, high-quality residential buildings on small sites across London.

‘IT IS ABOUT PRIORITISING WHAT PEOPLE VALUE: A SENSE OF COMMUNITY, SUSTAINABILITY AND SPACE’

Multiple entrances from the building’s communal stairway lead into different levels of each apartment, creating independent pockets within the home that might be used as a self-contained office or separate bedroom. ‘We build our homes on the principle of long-life, loose-fit,’ Zogolovitch says. ‘In the life of an apartment, there will be times when you might have a grandparent living with you, a grown-up child, a visitor, sharer or carer’. solidspace.co.uk.

When the first properties by non-profit developer Naked House are completed in Enfield next year, they may appear a little sparse. The 22 homes, a proposed mix of one- and two-bedroom units designed by OMMX, will be completely habitable but will contain a minimally finished interior – just a basic kitchen, rudimentary bathroom, heating and lighting – in order for future residents to adapt the homes as they see fit. The shells will be available to local residents at a reduced price, and will remain so in perpetuity. ‘It is prioritising what people want out of housing,’explains Naked House co-founder Simon Chouffot. ‘It is about giving the greatest importance to the things that people value:sustainability, a sense of community and the space to raise a family or expand. It’s about trying to put people back at the centre of housebuilding. “Developer” has been a dirty word for too long’. nakedhouse.org

HOME IS WHERE THE ART IS

The crisis of affordability in London is pushing creatives out of the city and separating them from civic life. When completed next year, A House for Artists in Barking will be a radical new way of ‘addressing the growing problem of affordable housing for artists in the capital,’in the words of project ambassador Grayson Perry. The building, developed by Barking and Dagenham council alongside arts charity Create and designed by Apparata architects, will provide 12 homes and a community hall, with lifetime tenancies at 65 per cent of the market rent for artists and their families.
Create London

In exchange, the artists are required to deliver weekly public events, putting them at the heart of the local area, while providing creative skills and expertise for those who want to learn. Or, as Barking and Dagenham councillor Darren Rodwell puts it, ‘A House for Artists is a new and better way to pay your rent, by being nice to your neighbours’. createlondon.org

MAKE YOURSELF A HOME

Marmalade Lane is a new co-housing community on the outskirts of Cambridge. Designed by Mole Architects for developersTown and the Marmalade Lane residents– AKA Cambridge Cohousing Ltd – the site consists of 42 terraced houses and a mid-rise apartment block. The properties are all arranged around the Common House, where there is a shared laundry room, guest bedrooms and a double-height hall used for yoga, communal meals and informal socialising.
Marmalade Lane

‘There’s so much going on, but you can choose how much you want to get involved,’ explains resident Frances Wright, who was closely involved in the design process and moved to the area specifically to join the co-housing community. ‘You can do things spontaneously in a way you can’t really do anywhere else. If you’re feeling bored, you Whatsapp others to say you’re in the common room, and they can join you if they want to.’ In addition to fostering a strengthening community, the project was also built to Climate Shield standards, with timber frames and triple glazing. marmaladelane.co.uk

As a developer of retirement communities, Pegasus Life is meeting the challenges of the UK’s increasingly ageing population and attempting to combat the isolation often associated with growing older. Belle Vue, the firm’s latest project, is designed to integrate its residents within the exclusive surroundings of Hampstead, north London, and features communal facilities such as gardens, a library, public restaurant and wellbeing centre alongside its 59 homes.

‘THE SPACES FUNCTION AS CONDUITS FOR ENCOUNTERS, ENCOURAGING PEOPLE TO COME TOGETHER’

‘These spaces function as conduits for friendships and encounters, encouraging people to come together and in turn foster a sense of the familial,’explains Joe Morris, founder and director of Morris+Company, the architects who collaborated on the project. The design centres around four towers ranging from four to ten storeys that each contain one- and two-bed flats behind a staggered brick façade.Inside, modern furniture and minimalist finishes bring a contemporary and cutting-edge perspective to designing for the older community. pegasuslife.co.uk

Set between London Bridge and Bermondsey, the Italian Building is the first project by Mason & Fifth, a new co-living firm with wellbeing at its core. Promoting a healthy outlook for mind and body, residents can benefit from perks such as a pavilion for yoga, Pilates and meditation, a running club and in-house chef to whip up a healthy breakfast buffet. The 28compact apartments and shared spaces have been designed to foster relaxation, creativity and community (£1,650pcm; mason-fifth.com).

An early pioneer of the co-living movement, this firm launched its first property, WembleyPark’s Old Oak, in 2016. This July saw its second outpost in Canary Wharf open – the world’s largest co-living space with 706 rooms over 23 storeys. Catering to a young and urban audience, it’s the brand’s first premises to offer nightly stays, as well as mid- and long-term lets. Highlights include a cinema and spa complete with a swimming pool(from £1,430pcm; thecollective.com).

Billing itself as an ‘all-inclusive rental service’,exempt from fees and with utilities and broadband included, award-winning Tipi appeals to young, time-poor professionals. Services including cleaning, laundry, a gym and outdoor cinema run at the Wembley Park property, and there are lounges, co-working areas and a communal kitchen too. TheManhattan loft-style flats feature furniture from John Lewis & Partners. And they are pet-friendly (from £1,885pcm; tipi.london).

This content is created and maintained by a third party, and imported onto this page to help users provide their email addresses. You may be able to find more information about this and similar content at piano.io
Advertisement - Continue Reading Below
More From Design
Design Hero: Bodil Kjaer
Tom Dixon’s bold new bathroom collection for VitrA
Advertisement - Continue Reading Below
Meet tomorrow’s big names of British design
Quick homeware buys sure to raise a smile
Spanish architect Ricardo Bofill dies aged 82
Why the ‘Mah Jong’ sofa is an icon of 70s design
What are the big design trends for 2022?
Meet the muse for Ginori 1735’s new collection
Treasured: Henry Holland on his favourite object
ELLE Decoration International Design Awards 2021