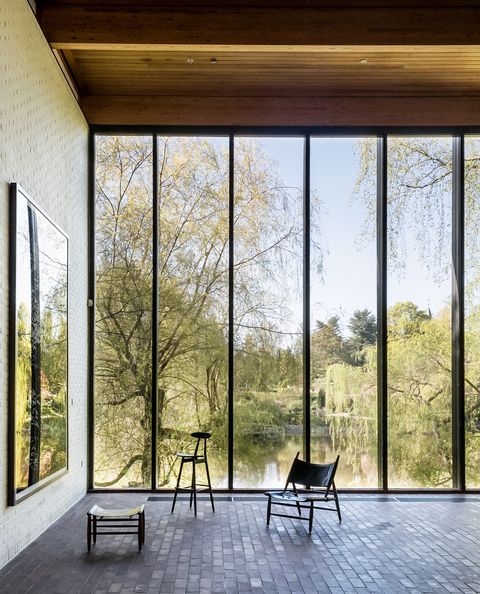 Described by the American architect Michael Sheridan as ‘one of a distinguished group of Danish modernists who wanted to create timeless objects that would serve people and exist beyond fashion’, Vilhelm Wohlert (1920-2007) had no time for attention-grabbing novelty. Rather, Sheridan says, his approach was to ‘search for the natural and apparently anonymous ideal object’.

Since its launch in 2012, craft-focused design brand Stellar Works has championed Wohlert’s work, reissuing several of his pieces from the 1950s. The edit is a collaboration with Wohlert’s son and fellow architect Claus. Now, to celebrate the 60th anniversary of the Louisiana Museum of Modern Art near Copenhagen – which Vilhelm Wohlert co-designed – the company has unveiled three more pieces, all originally developed for the museum: a barstool (above), a matching stacking chair and a copper dome pendant (both below).

A Copenhagen native, Wohlert studied architecture at the Royal Danish Academy of Fine Arts, where one of his tutors was the designer Kaare Klint. In the early 1950s, Wohlert was a visiting professor at the University of California, Berkeley, where he encountered the Californian modernist architectural style and the flat-roofed, timber-framed houses built by developers such as Joseph Eichler. These modest designs would later have a great influence on the Louisiana Museum.

Wohlert had no time for novelty, focusing instead on creating timeless objects

Wohlert was invited to work on Louisiana in the mid-1950s by its founder Knud W Jensen, who had bought a 19th-century villa in Humlebaek, just north of Copenhagen, in order to turn it into Denmark’s first contemporary art gallery. Working with fellow architect Jørgen Bo, Wohlert devoted the next 30 years to the project, designing a group of buildings that sit alongside the villa.

The first wing opened in 1958, and was followed by four others and a concert hall in the ensuing years. Linked by glass walkways and cobbled paths, the museum’s low-lying pavilions almost disappear into the wooded landscape. Inside, exposed brickwork, timber ceilings and full-height glass walls offer panoramic views of the trees. The museum’s café is especially picturesque, overlooking the waters of the Øresund across to Sweden.

Tasked by Jensen with finding stacking chairs for concerts and lectures, Wohlert went a step further and designed his own, with a curved shape and clever angles that allow it to be stacked. Stellar Works’ reissue of the design now graces the Louisiana Museum café, where, surrounded by brick tiles, concrete and warm wood, it’s destined to win many new admirers. stellarworks.com

This article appeared in the March 2020 issue of ELLE Decoration.

This content is created and maintained by a third party, and imported onto this page to help users provide their email addresses. You may be able to find more information about this and similar content at piano.io
Advertisement - Continue Reading Below
More From Design
Vincent Van Duysen on Molteni & C’s 2022 launches
Meet the winners of the 20th annual EDIDA
Advertisement - Continue Reading Below
Peter Marino gives the Dior flagship a new look
How to welcome wildlife to your garden
Jørgen Gammelgaard, Danish design’s missing link
New technology for the home
The design course setting students up for success
Created by
Istituto Marangoni London
Salone Del Mobile 2022: the highlights
Fritz Hansen: a potted history of Danish design
The best 15 mugs to buy now