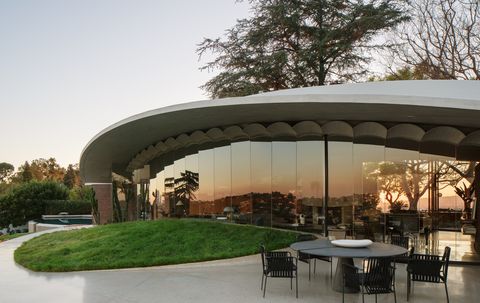 Seen from below, Silvertop house looks like an upside-down crescent moon gently resting on the side of a hill overlooking LA’s Silver Lake district. Designed in the 1950s by American architect John Lautner, a pupil of Frank Lloyd Wright, it’s a modernist landmark. Thanks to its first owner Kenneth Reiner, it was also the most cutting-edge house of its day. Kenneth, a tycoon with a love of gadgetry and invention, worked closely with Lautner to make sure his home was the pinnacle of contemporary engineering, with features reminiscent of a villain’s lair from a James Bond film.

Working on the property, Lautner experimented with his sculptural uses of cement; it’s here that he built the first-ever infinity pool, devised a cantilevered driveway, and created vast, curved glass walls that open onto terraces and gardens, creating a continuous indoor/outdoor feel. Indeed, many innovations that became synonymous with the great man’s style began here, with Kenneth eventually bankrupting himself in pursuit of their shared vision.

When the house was bought by Luke Wood in 2014 (for a staggering £7.5 million), the music executive and president of Beats Electronics felt a duty to the legacy of the building. He hired architect Barbara Bestor, a prominent figure of the Californian new modernist movement to work on the sensitive renovation. She, in turn, called upon the services of interior decorator Jamie Bush, known for his passion for organic design. ‘The main challenge,’ says Barbara, ‘was discreetly bringing the 21st century into this incredible structure, while making it a warmer home for family life’.

The changes and additions she and Jamie have made, such as the fluted cypress panelling in the kitchen, the open-air bathroom connected to the main bedroom by retractable glass panels and the enlarged living room terrace, have all been carefully considered. Some of Lautner’s original plans have also been completed, 63 years after he first drew them. One of those ideas was the ‘hawk’s nest’, an external glass viewing platform accessed via a step ladder, that now offers an expansive panorama of the man-made lake and cityscape below.

‘The main challenge was discreetly bringing the 21st century into this incredible structure.’

‘It’s been a matter of respecting Lautner’s vision by realising things that were not yet possible in the 1960s,’ says Barbara. ‘The best way, in my opinion, was to not be faithful to the original at all costs, but to follow the natural connection between my own design language and that of the likes of Lautner and Frank Lloyd Wright.’ It’s an intuitive method of refurbishment and one that has resulted in a home that’s much more than a museum to modernism. bestorarchitecture.com

This content is created and maintained by a third party, and imported onto this page to help users provide their email addresses. You may be able to find more information about this and similar content at piano.io
Advertisement - Continue Reading Below
More From Houses
Set designer Anna Burns’ cinematic London home
Elegant country-style retreat in central Paris
Advertisement - Continue Reading Below
Wabi-sabi way of life in rural France
The Milan home of fashion blogger Tamu McPherson
Rug brand CC-Tapis founders’ home in Milan
Home of Astep co-founder Alessandro Sarfatti
Transformed Victorian townhouse in Somerset
Christmas in stylist Sanne Hop’s Amsterdam home
It’s a calm Christmas at this Cambridgeshire home
Christmas is a time for glamour in this home