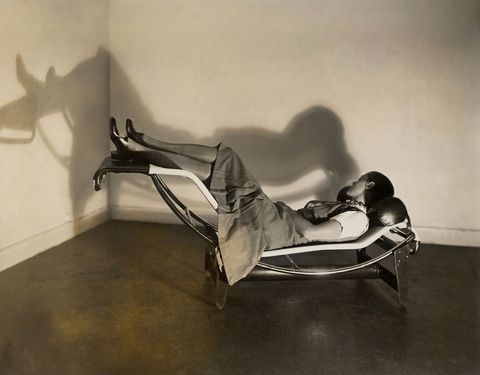 On the outskirts of Paris, the Fondation Louis Vuitton’s current exhibition celebrating the life and work of designer Charlotte Perriand is ambitious in terms of both scale and scope. Filling 11 galleries over four floors, it’s the first time the expansive Frank Gehry-designed building has been given over to the work of a single artist and features 50 rare examples of her furniture designs alongside full-scale reconstructions of spaces she created.

When it comes to exhibitions, the term ‘blockbuster’ is usually reserved for shows of the work of the great masters: Matisse, Van Gogh, Picasso... artists with mass appeal and reach. While Perriand is recognised as a leading figure in 20th-century design, the fact the show has been so popular speaks to how exceptional a figure she was – a strong modern woman dedicated to defining a new way of living, linking art, architecture and design.

Marking the 20th anniversary of her death at the age of 96 in 1999, the exhibition was conceived in close collaboration with the designer’s daughter Pernette and her husband Jacques Barsac, who acts as Perriand’s official biographer. Visiting the show shortly after it opened at the end of last year, the building was packed. Parisians and foreign visitors queued around the block to get tickets. Walking the halls of the gallery with Pernette and Jacques, their awe is palpable, both clearly overwhelmed by the number of people and the interest in and passion for her mother’s work. ‘She would have been so pleased to see this,’ says Pernette. ‘It’s complete, linking all the different elements of her work together in one place. It’s incredible.’

Perriand was known for her association with architect and designer Le Corbusier – who on their initial meeting is said to have sent her packing with the sexist comment, ‘We don’t embroider cushions here!’ – and much of this exhibition seems to be an attempt to pull her oeuvre and reputation out from under his shadow. As Sébastien Cherruet, one of the show’s curators, points out: ‘It’s a shame she’s only known as a woman who simply designed furniture for Le Corbusier. People need to see how she conceived entire spaces and the synthesis they had with art.’

And thanks to this exceptional showcase, they can... Starting with her vision of contemporary living from the late 1920s, you can see her influences and ideas, which completely broke with concepts of the home at that time. Inspired by the mechanical, by airplanes and cars, she used stainless steel to make shockingly modern furniture – no doubt informing the ‘Chaise Longue’ and ‘Easy Chair’(‘Fauteuil Grand Confort’) developed at the end of that decade with Le Corbusier and Pierre Jeanneret. ‘Le Corbusier came up with the programme, the framework,’ says Pernette. ‘He was like, “I need a chair so someone can sit like this,” but they were Charlotte’s designs.’

A communist and understated feminist, Perriand was always politically engaged, and her creations such as open kitchens and prefabricated dwellings presage current conversations about the roles of women in society, democracy in design, and sustainability, turning as she did to more organic natural forms as she progressed. ‘She was never militant, but she had a strong point of view that she wanted to get across,’ says Pernette.

Other key elements of the exhibition that show Perriand’s continuing relevance today include the synergy between art and design. Her work sits alongside those of artists from the era, some of whom were personal acquaintances. As Jacques points out: ‘Without the work ofPicasso, Fernand Léger and Calder, you couldn’t have had modern architecture.’

Then there’s an understanding of the dialogue between Eastern and Western cultures. Perriand’s time spent in Japan in the 1940s deepened her comprehension of the links between creation and tradition: ties that still remain significant.

Italian furniture brand Cassina – the only global company with the rights to produce Perriand’s designs – has collaborated with the exhibition’s curators, providing reconstructions of her work and loans from its archive. Most spectacular, perhaps, is the futuristic ‘Refuge Tonneau’ (1938), which normally resides at Cassina’s ItalianHQ. This piece of mobile architecture (think space-age metal and timber cabin) was conceived with Jeanneret for life in the mountains.

So, while Le Corbusier may have taken the credit for some of Perriand’s greatest work, it seems fitting that this feisty and forward-thinking designer is finally getting the credit she deserves. Get to Paris and see this show. Design retrospectives don’t come any better.

This content is created and maintained by a third party, and imported onto this page to help users provide their email addresses. You may be able to find more information about this and similar content at piano.io
Advertisement - Continue Reading Below
More From Lifestyle & Culture
Must-have kitchen kit, according to top chefs
Dimorestudio designs Browns’ new Mayfair flagship
Advertisement - Continue Reading Below
Five of the UK’s best destination art galleries
My Cultural Life: Caleb Femi
The world's most striking modern art museums
How to rewild your garden
My Cultural Life: Diane von Furstenberg
Why the suburbs are the new sexy
Meet the muralists painting streets in positivity
My Cultural Life: Andrea Riseborough