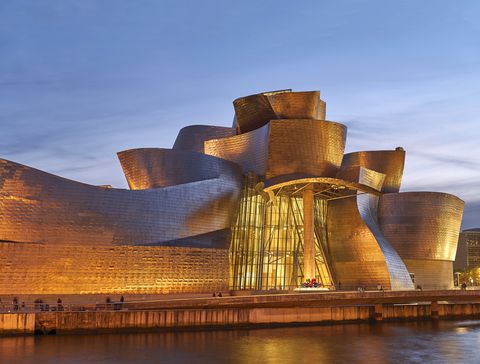 Considering the rather tangible nature of all things design and architecture, a lengthy period in quarantine doesn’t feel particularly conducive to fresh inspiration. Thankfully, the industry’s innovators are rejecting inertia – in the face of temporary closure, design institutions are turning to digital content, curated travel platforms are offering virtual tours of incredible spaces and we’re spending those evenings anchored to the sofa with a newly discovered podcast or documentary in tow. Here are five ways to keep those creative juices flowing.

1. Tune in for live talks at design museums and galleries
Cultural institutions are calling on their creative networks – and raiding the archives – to produce talks and live studio tours with world-leading designers and architects.

The Frank Gehry-designed Vitra Design Museum in Germany’s Weil am Rhein has launched a weekly series of Instagram Live talks led by director Mateo Kries. The first guest of #VDMHomeStories is design heavyweight Joseph Grima, creative lead of Design Academy Eindhoven and Triennale Milano. Each week’s episode will explore the museum’s projects and exhibitions past and current, plus discuss how design can help the world face a crisis.

Plus, don’t miss online design magazine Dezeen’s Virtual Design Festival – the world's first of its kind – which starts on 15 April, the huge archive of conversations with diverse creatives dug up by the Barbican Centre team or arty talks from independent outfits like Leeds collaborative space Duke Studios, who kick off new venture Duke Evening Sessions with designer Morag Myerscough on 2 April.

2. Explore some of the world’s most striking homes

A dozen of exalted American architect Frank Lloyd Wright's most cherished designs are digitally opening their doors via social media initiative #WrightVirtualVisits. Each Thursday over six weeks from 2 April, two of the houses he created – including Fallingwater, Hollyhock House, Taliesen West and Unity Temple – will 'swap' a video tour on their platforms, led by Lloyd Wright curators and experts.

Also utilising Instagram is holiday rental platform The Plum Guide, which employs rigorous review methods to rate homes on everything from the availability of natural light to shower pressure. Its network of incredible homes will be the star of a new series of digital tours – led by their unfailingly interesting owners – starting with gorgeous Copenhagen pad The Gantzel Studio owned by entrepreneur Louise Ganzel, at 3pm on 3 April.

Also coming soon on The Plum Guide is an upskilling workshop series led by hosts that are experts in cooking, languages or art and design (including a snoop around their house, of course), and don’t miss the five new cities just added to the website – Florence, Venice, Porto, Edinburgh and Dublin – for post-quarantine trip planning.

With much of Europe’s cultural scene sadly shuttered, museums and galleries are on a mission to grant us unprecedented online access to their exhibitions, archives and unique architecture.

When Google’s Arts and Culture platform quietly paired with the hundreds of the world’s cultural institutions to digitally map swathes of their physical space, it couldn’t have predicted the sharp rise in popularity driven by stranded culture seekers. Among the most architecturally-striking sights are Bilbao’s curved wonder The Guggenheim Museum, majestic art gallery MAK Vienna and gothic masterpiece Doge’s Palace in Venice.

In other Guggenheim-related news, shoe designer Maison René Caovilla – and long-time partner of the Peggy Guggenheim Collection – has marked the seminal Venetian museum's 40th anniversary with a virtual Instagram tour of its most prized pieces. Tune in every Tuesday when young art academics will be giving talks on specific works.

Back in Britain, the brief window between London's Tate galleries closing their doors due to coronavirus and subsequent stricter measures allowed the team to film curator-led tours of the Andy Warhol and Aubrey Beardsley exhibitions, which they’re now offering online for free from 6 April and 13 April respectively. Post-peruse, head to YouTube for the Warhol-themed edition of the gallery’s ‘How To’ series, and check in soon for new videos ‘How to Draw like Paula Rego’ and ‘How to Make a Pot like Grayson Perry’.

Lauded gallery group Hauser & Wirth were also quick off the mark, launching new digital video and event platform ‘Dispatches’, as well as their first ever online exhibition ‘Louise Bourgeois: Drawings 1947 – 2007’. The second, ‘George Condo: Drawings for Distanced Figures’, will present portraits by the contemporary American artist created during the last three weeks of isolation from 3 April.

For a restful moment, tune into the new webcam stream from Cambridge art gallery and collector’s house Kettle’s Yard, which has been set up in a particularly peaceful corner flanked by houseplants and bathed in light.

4. Plug into a creative podcast

Once a trusty companion reserved for commuting, the podcast has truly come into its own. Here are some of our picks – old and new – that put design top of the agenda.

For the latest episode of Justyna Green’s popular weekly podcast series On Design, she quizzes Papier CEO Taymoor Atighetchi and 8 Holland Street gallery founder Tobias Vernon – an unlikely pairing, perhaps, but they’re old friends from their Cambridge days – on friendship, entrepreneurship and good taste. Delve into the archive for past musings with the likes of Piero Lissoni, Sophie Ashby and Michael Anastassiades.

In her new podcast Design Principals with Bethan Ryder, ELLE Decoration’s editorial manager puts female designers and architects firmly front and centre. A discussion on sustainable design, self-discipline and making it in a man’s world with leading Slovenian designer Nika Zupanc kicked off the inaugural episode, while the second sees design polymath Lara Bohinc talk everything from materials to former Yugoslavia’s Spomenik monuments. A chat with Dutch designer Kiki van Eijk is soon to follow.

Lauded writer and critic Grant Gibson is better placed than most to go in depth on design. For his Materials Matters podcast launched last year, he invites a designer, maker or artist to muse on a single material – think Bill Amberg on leather and Bethan Laura Wood on laminate. An exception was made for a standout episode with Edward Barber and Jay Osgerby, who dive into plywood, recycled plastic and how the British design scene has changed since the 1990s.

If you can tear yourself away from a boxset binge, these stimulating shows are well worth a stream – think awe-inspiring architecture, gems from the archive and insights into the design world’s brightest minds.

On design and craft

Abstract: The Art of Design – which profiles masters in different mediums – has returned to Netflix for a second season, this time with British designer (and former ELLE Decoration editor) Ilse Crawford, stage designer Es Devlin and leading architect Bjarke Ingels among its creative cast.

For a more meditative watch, there’s something soothing about BBC three-part series Handmade on the Silk Road, which explores the enduring skill of traditional craft on the ancient trade route. Episodes are evocatively named The Potter, The Wood Carver and The Weaver.

While Britain’s beloved galleries are shuttered, Secrets of the Museum offers a peek behind closed doors. This inaugural series, which started in February this year, shines a spotlight on the complexities of readying collections for display at London’s V&A.

After hearing from the master himself, dip into the slightly barmy Bauhaus Rules with Vic Reeves, which challenges six Central St Martins graduates to create a work of art, design or performance according to the art school’s creative code.

For a dose of ‘dream house’ envy, head to Netflix where Caroline Quentin and Brit architect Piers Taylor take on The World’s Most Extraordinary Homes. While the first series is led by different landscapes – the four episodes follow coastal, mountain, forest and underground homes – the second’s striking builds are guided by country, from a brutalist retreat in India to an Israeli home integrated into a rock face.

If your quarantine attention span isn’t up to a full-length feature, dig into the vast Ted Talk archives – you can search by keyword – for bold visions in brief. Starchitects like Frank Gehry, Renzo Piano and Moshe Safdie are all there, as are American designer David Rockwell and sharp commentators and curators like Alice Rawsthorn and Paola Antonelli. We were charmed by Eames Demetrios’ affectionate recollection of his design legend grandparents Charles and Ray Eames.

BBC iPlayer has surfaced a brilliant 1961 documentary Barbara Hepworth, whose sculptures seem all the more striking in black and white.

Keep up your spirits up and subscribe to ELLE Decoration here, so our magazine is delivered direct to your door.